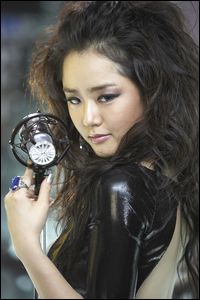 Her latest film, "Love Me Not", in which she tried to abandon her image as a cute and innocent girl for that of a grown-up sex icon, flopped both critically and commercially late last year.

Now her latest appearance in a TV commercial is triggering a debate over whether the song and the footage were stolen.

While her role in the commercial was limited to acting, the latest criticism is among a series of perceived missteps the 20-year-old actress has made since she began trying to transform her image into that of an adult.

In the ad for KTF, a mobile carrier, Moon, wearing heavy makeup, shakes her scantily clad body in a fashion that reminds many viewers of pop singer and sex icon Lee Hyo-ri.

Since the ad began airing on major channels last month, some critics said her dancing may have been copied from the music video "Buttons" of American pop group the Pussycat Dolls.

Others also suspect that the song used in the commercial, titled "& Design" and sung by the actress, was copied from "My Old Story", a song written by popular 1980s singer-songwriter Cho Duk-bae. The refrains of the two songs sound similar, but the composer of "& Design" denied the allegations, saying he didn't know of Cho's song.

Since beginning her modeling career at the age of 12, Moon shot to stardom, starring in such hit films as "A Tale of Two Sisters" in 2003 and "My Little Bride" in 2004.

She is a freshman in the humanities department at Sungkyunkwan University in Seoul.

"'Nation's Little Sister' Falls Down Growing Up"
by HanCinema is licensed under a Creative Commons Attribution-Share Alike 3.0 Unported License.
Based on a work from this source