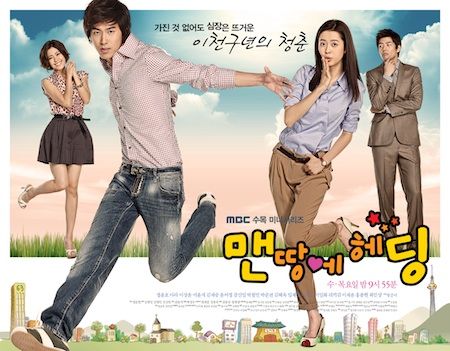 - A young man who has nothing but a passionate heart

On the day of the poster photoshoot, the four were as energetic and lively as ever. Jeong Yunho had to do a countless number of jumps for his shot, but he remained full of energy and continued to try his hardest. He even joked, "Usually my character's outfit consists of sweats, so it feels strange to be wearing normal clothes".

"No Limit" is about the passionate young man Cha Bonggun who harbors a deep grudge inside and Kang Haebin, the girl who has everything but wants to succeed by standing on her own. Their story will be about a love that springs after the two experience many misunderstandings and get into a lot of love-hate fights. Also, Cha Bonggun has managed to survive three brushes with death and becomes a living testimony to the triumph of the underdog. This drama first airs on Sept. 9, 2009.

"'No Limit' Official poster"
by HanCinema is licensed under a Creative Commons Attribution-Share Alike 3.0 Unported License.
Based on a work from this source