'No one can act against self-interest' 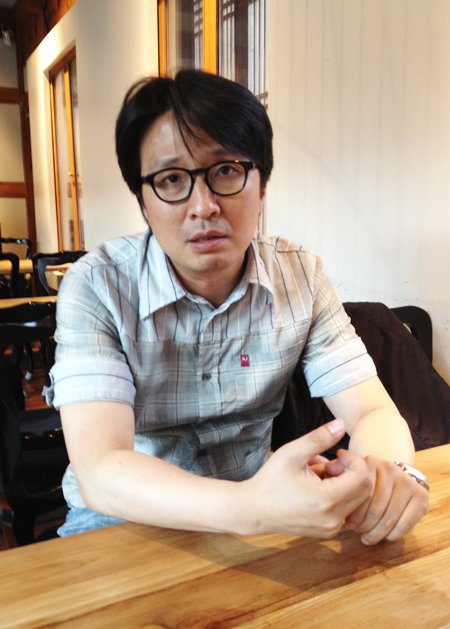 Its characters may don the royal garb of centuries ago, but "The Emperor's Concubine ", released today, is a thinly-veiled critique of modern Korean society, according to director Kim Dae-seung.

Much has been said in the local media about the ample nudity and the theme of carnal desire in the film, but Kim asks the audience to look beyond the libido. 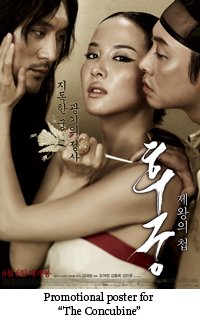 Behind the plot, every protagonist is driven by self-interest - and not much else - and that is where Kim points his finger.

"I told the crew and actors from the beginning there's not a single good guy or girl here", said the director in a recent interview with The Korea Times. "It's perfectly easy to do good when it doesn't affect us. But when it actually comes to serving our own interests, none of us can be good or just".

He consequently summarizes his work as a story without a hero: "They are just four people mired in love and hate relationships", referring to the powerless king (Kim Dong-wook, "Take Off", 2009), his mother and regent (Park Ji-young, "The Show Must Go on",2006), his object of unrequited love Hwa-yeon (Cho Yeo-jeong, "The Servant", 2010) and her former lover and now eunuch Gwon-yu (Kim Min-joon, "Beloved", 2007).

The film delves into the psychologies of the four characters, each with a singular motive. The queen mother and former concubine works tirelessly to assassinate the current king and put her son - his stepbrother - on the throne. The sole objective for the son, who later becomes king - is, however, to secure the love of the beautiful Hwa-yeon, even after she becomes his stepbrother's second wife. She, at first, is bold enough to abandon everything for love and elope with Gwon-yu but after the birth of her own child goes through a transformation into someone who would do anything to protect her child, like the queen mother. (The castrated Gwon-yu works for no one but himself, taking sides only with those holding power.)

In this vicious cycle from Hwa-yeon to queen mother, which Kim calls the central message, a satire of the modern-day Korean mother and son appears.

"Some critics say the women (in the film) are monsters and the men their sacrifice, but it's not that simple. The queen mother only wanted to make her son king and let him reign over a peaceful kingdom. She must have given him rigorous training, kind of like the mothers today with their children, driving them to after-school academies without giving them any time to rest. That is considered motherly love here. But is it really maternal? Is there no desire of her own reflected in this pursuit (of success)? Also, the children, they are robbed of their dreams by their teens. If they are unhappy now, will they be happy later? Moms say it is in their children's best interest, but is it really?"

Another subject that excited him during the interview was the voyeuristic palace set, created expressly to induce fear.

Servants, who are always present outside every chamber, are watching and overhearing royal intrigue. The wedding night of the new king and his eerily lifeless bride is observed (through papered wooden doors) by top-ranked aristocrats and even his mother. He is even instructed by a eunuch on the process of lovemaking. Another powerful scene takes place in the underground prison, in which Hwa-yeon discovers terrorized inmates trembling behind a single rope - not a set of bars in sight.

"In the scene, the head female servant to the queen mother threatens the prisoners with so much cruelty... They are so scared that even a rope can deter them from breaking out. It's because they know what would happen if they even attempted to escape. The more iron bars there are, the less fear there is for me".

In the end, the film gives no answers about the way out of this horrible world, other than death. Another possibility is "Painful Regret", the title of a poem by Hwang Ji-woo the director gave to his cast before the shoot.

"It saddens me", it begins, "Every place I loved / is now destroyed".

"'No one can act against self-interest'"
by HanCinema is licensed under a Creative Commons Attribution-Share Alike 3.0 Unported License.
Based on a work from this source