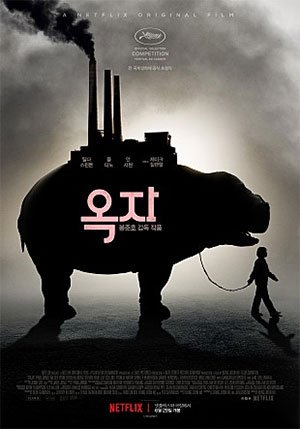 Bong Joon-ho's "Okja" has been enjoying steady success despite a boycott by major chains of the Netflix-produced film.

The family-friendly CGI extravaganza is going strong even in its fifth week, and has attracted over 300,000 viewers.

"Okja" was released simultaneously on June 29 on Netflix and independent cinemas across the country. It got off to a rocky start due to hostility from the multiplex chains, who wanted a head start on the online release. That meant it was only screened in 1.9 percent of cinemas nationwide on the day of its release.

It was Bong's fourth film to be invited to the Cannes Film Festival, and stars Tilda Swinton and Jake Gyllenhaal besides its Korean teenage lead Ahn Seo-hyun.

It tells the heartwarming story of a girl who must save a giant genetically modified pig from an evil corporation.

"'Okja' Fares Well in Theaters Despite Chain Boycott"
by HanCinema is licensed under a Creative Commons Attribution-Share Alike 3.0 Unported License.
Based on a work from this source