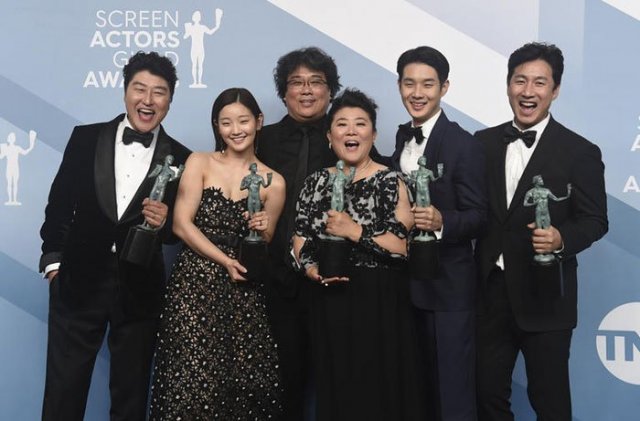 The cast members of Bong Joon-ho's film "Parasite" pose with their statuettes at the annual Screen Actors Guild Awards on Sunday. /AP-Yonhap

"Although the title is "Parasite", I think the story is about co-existence, and how we can all live together", said actor Song Kang-ho through a translator while accepting the award.

The SAG Awards, one of Hollywood's big three awards, along with the Golden Globes and the Oscars, "focus on both individual performances as well as on the work of the entire ensemble of a drama series and comedy series, and the cast of a motion picture".

"Parasite", up for six Oscars including best picture and best director, has emerged as one of the strong contenders in a competition with heavyweights Martin Scorsese for "The Irishman", Todd Phillips for "Joker", Sam Mendes for "1917", and Quentin Tarantino for "Once Upon a Time in Hollywood".

This year's Academy Awards will be held on Feb. 9.