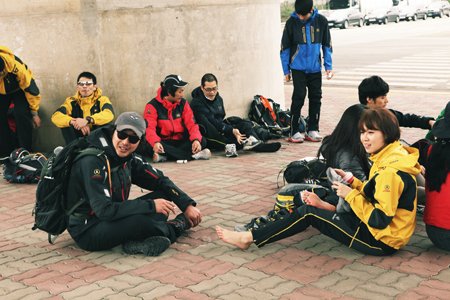 Actors Ha Jung-woo, front left, and Gong Hyo-jin, front right, star in "Project 577", an uncategorizable film masterminded by Ha and directed by Yi Keun-Woo. While these two bare just their feet and not much else personally, the film delivers a critique of the state of Korea's film industry.
/ Courtesy of Dasepo Club

Categorizing this film is a perplexing job; the promoters are describing it as a "real variety movie", which does not help.

"Project 577", masterminded by Korea's most in-demand actor Ha Jung-woo and directed by relative newcomer Lee Keun-woo, claims to be a documentary about Ha and his friend trekking for 577 kilometers, from Seoul to Haenam, South Jeolla Province, the peninsula's southernmost point.

But after 99 admittedly entertaining minutes, one is left with a pang of confusion. There is no discernible message, just a vaguely warm, fuzzy feeling instead. Those fans of Ha and Gong Hyo-jin (his co-star in Jeon Gye-soo's "Love Fiction" earlier this year) hoping to get an intimate look at their favorite stars will walk out disappointed. So what is the point?

At last year's Baeksang Arts Awards, Ha, winner of the Best Actor honor in 2010, promised on live TV that he would complete this cross-country trip if he were to win two consecutive years. He did and made this film. It still does not say what justifies this movie.

There is the trek itself, with a mission of self-discovery, but we see more of them complaining about how difficult it is during their rest stops than actual walking. There is the dubious decision to hire 15 actors to join Ha and pay them according to the number of days they spend on the trip. (How do we know if they are not acting?) Finally, there is the important plot twist that enigmatic Ha forces upon the team that makes the whole affair seem like a dishonest vanity project as serious as celebrity reality TV.

But the answer seems to lie in the sporadic commercial breaks that the actors enact: it is a story about the financial difficulties that non-mainstream actors and producers face in Korean cinema. With the exception of Ha and Gong, the rest (aside from breakout star Kim Sung-kyun, who plays the serial killer in last weekend's No. 1 movie, "Neighbors") are virtual unknowns. Snippets of their life stories are inserted throughout the movie, showing the realities of non-celebrity, non-bankable actors.

Commercial interests do not leave the screen for a minute. There are obvious product placements, most saliently the actors' colorful outdoor gear stamped with logos. Commercials for the likes of ramen noodles show how difficult it is to fund a project like this.

"Project 577" succeeds in implanting these thoughts in the audience by taking such an open stance on financial matters, but it ultimately fails to be more than light comedy because each actor does not get enough time to sufficiently relate to; 16 actors are too many.

Even for the promotion of this film, the local media have showered the limelight exclusively on Ha and Gong, riding high on an unsubstantiated rumor of romance kindling between them.

But they actually make the least interesting presence in the film. Both are known as much for their inscrutability as their acting skills, and they lend nothing but just their famous faces. Others shine, albeit too briefly. Han Soo-hyun, an acting hopeful without a job, Lee Ji-hoon, daytime soap opera star, and Ha Seok-jin, a TV audition contestant, leave the most lasting impressions.

So casting directors, come watch this film and hire them for your upcoming shoots.

"Project 577" is currently in theaters nationwide. Runs for 99 minutes. Rated for 15 and over. Distributed by Filament Pictures.