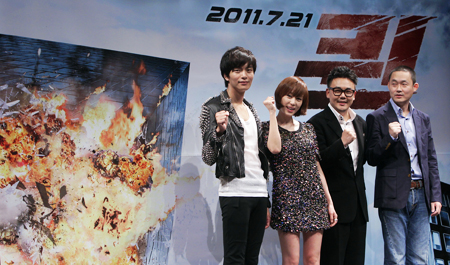 You've seen them on the streets of Seoul. They zip past your car, driving in the narrowest of spaces with the most unimaginable speed. These "quick service" delivery motorcycles, the most frightening presence on the road, are about to make their deadliest turn yet in a new blockbuster.

"Quick", the latest offering from the team behind one of the highest grossing Korean movies of all time, "Haeundae" (2009), promises another action-filled feature film, helped by "the fastest speed captured on a Korean screen", according to the filmmakers.

The straightforward motorcycle-themed thriller follows the delivery of a bomb by Gi-su (Lee Min-ki), who is blackmailed into the job while on another mission to transport girl group starlet A-rom (Kang Ye-won). If the driver does not oblige, a bomb planted in the passenger's helmet is going to explode.

At the promotional press conference on Monday, the filmmakers touted the technological advancements formerly unavailable in the country. If all the claims are true, they should compensate for the relative lack of A-list star power in the cast.

"When we were planning the scenario, I told (director) Jo Beom-goo that if we cannot surpass the American 'Speed' (1994) or the French 'Taxi' (1998), we shouldn't make it", said executive producer JK Youn, director of "Haeundae". He continued, "If I weren't confident, I would have never taken on the project".

Yoon also said he wanted to push the boundaries of "mainstream action/entertainment cinema" with the latest release.
To back up the bold claim, the filmmakers brought in a big gun from the States: a camera specifically designed for high-speed situations and used the so-called Doggicam Sparrow Head 200 (SH 200), from Doggicam Systems in Burbank, Calif. It was used in "Fast & Furious" (2009). 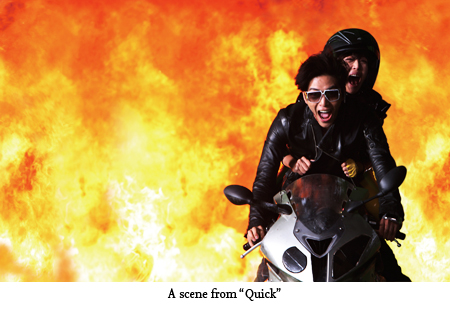 For a Seoulite moviegoer, this is bound to be a special experience, as the filming equipment allowed capturing hair-raising chase scenes at 150km/h on average, on readily recognizable roads that locals use on any given day.

Lee's German-made 1000cc bike throttles, for example, through Myeongdong and along the Gangbyeon Expressway in two of many chase scenes. The camera was mounted onto another motorcycle and operated by remote control to capture every moment up close.
The wish to break new ground was also translated into an ample use of digital enhancements, using the technology on more than a quarter of all outtakes, according to Jo.

On the casting choices, the director said he picked two of the main trio - Lee, Kang, and Kim In-kwon, who plays chaser policeman Kim Myeong-sik - based on the"great chemistry" he observed on the "Haeundae" set.

Though tickets will not sell just based on their second-tier names, each has a solid background in film and TV beyond the 2009 blockbuster.

At the press conference, the trio all praised the director, saying his attention to even the smallest detail helped them perform stunts without body doubles and no major problems.

"Quick", distributed by CJ E&M, will open in theaters on July 21.

"'Quick' promises fastest Korean blockbuster ever"
by HanCinema is licensed under a Creative Commons Attribution-Share Alike 3.0 Unported License.
Based on a work from this source