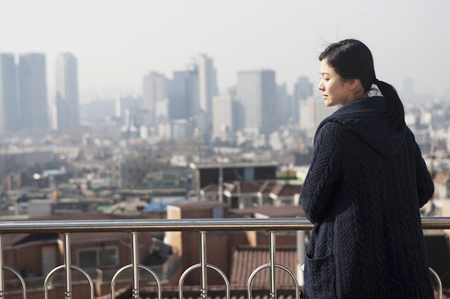 Song Hye-kyo appears in a scene from "A Reason to Live", a film that marks the return of director Lee Jeong-hyang. / Courtesy of Lotte Entertainment

It appears "A Reason to Live" has also succumbed to the so-called "BIFF curse" - films that premiere at the Busan International Film Festival (BIFF) have mostly failed on general release.
The film's weighty theme of capital punishment and absolution may have deterred some moviegoers, but it also suffered from distribution problems. The few theaters that showed the film alternated screenings with other works.

Nevertheless, "A Reason to Live" deserves more screenings in a market dominated by Hollywood-style scripts - especially since it is a rare opportunity to observe from the viewpoint of a female protagonist crafted by a likewise uncommon female writer-director. In addition to marking actress Song Hye-kyo's return to the big screen, "A Reason to Live" sees the big comeback of director Lee Jeong-hyang. The filmmaker has ended a nine-year hiatus since her previous hits "The Way Home" (2002) and "Art Museum By The Zoo" (1998).

From start to finish, the movie maintains a quiet tone while probing social issues. When documentary director Da-hye (Song Hye-kyo) loses her fiance in a hit-and-run, she gives into other people's pressure to forgive the juvenile perpetrator of the accident by filing a petition for his parole. She firmly believes that absolution is the best way to regain inner peace and embarks on a documentary film about the miracle of absolution with church support.

Meanwhile, the film develops a sub story featuring another main character. Ji-min (Nam Ji-hyun) has suffered from health problems and domestic violence, but cannot forgive her family. Ji-min tries to expose the hypocritical aspects of Da-hye's action, saying "absolution without receiving an apology is false".

Da-hye learns that the boy took his friend's life after being released on parole and also stabbed his mother. She is plunged into confusion and is tormented by how her actions led to another death. The director said she wanted to create a film criticizing modern society for compelling victims and their families to absolve and forget, without fully considering how their wounds take time to heal. Lee's film unravels from the perspective of victims and argues that they have "the right not to absolve".

The film also expands its thematic frame to social problems stemming from domestic violence. Lee said she intended to show how juvenile crime is mostly attributed to parental problems through Ji-min. The character seems to mainly exist in order to pose questions on forgiveness and allow Da-hye to reflect; but Ji-min's family atmosphere tells a story of its own as well as touching upon the central theme of forgiveness.

Song shows solid and restrained acting while depicting her character's complicated inner state. Considering that her previous roles required relatively shallow displays of emotions, there is no doubt that "A Reason to Live" marks a turning point in the actress' career.

The film itself might not be enough to satisfy some viewers' high expectation of Lee's comeback from a long break, but her sophisticated directing style has not changed and even seems to have become more intense than before. However, the overly explanatory dialogue may irritate some audiences as the film chooses to tell rather than show the story. For this reason, some scenes sometimes feel like a sermon from the director. The structure of the story itself is also not very deep or dramatic compared to Lee Chang-dong's "Secret Sunshine" (2007), which also dealt with the theme of absolution.

Nevertheless "A Reason to Live" sheds light on actual social issues that are worth noting. Recently, "Silenced"'s depiction of a real-life sexual assault prompted the police to reinvestigate the case. Likewise "A Reason to Live" reveals contradictory aspects of local criminal law.

A Lotte Entertainment release, "A Reason to Live " is now showing in theaters. Three out of four stars.

Ryu Seung-jin is an intern for The Korea Times.

"'Reason' transmits social messages"
by HanCinema is licensed under a Creative Commons Attribution-Share Alike 3.0 Unported License.
Based on a work from this source