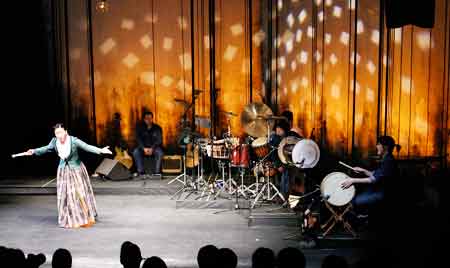 "It is practically impossible to live nicely. I am too fat to get a job, not even part-time. Per capita income of the nation is $20,000, but I am still hungry. There are many unsold apartments, but I do not have a place to lay my body down. I want to live nicely, but how could I do so in this expensive world", a "sorikkun", or narrative singer recites in a rhythmical tone.(Above picture: Lee Ja-ram performs in "Sacheon-ga", a contemporary "pansori" adaptation of Bertolt Brecht's "The Good Person of Szechwan"./ Courtesy of Doosan Art Center)

This is a scene from "Sacheon-ga", a "pansori" performance staged at Baekam Art Hall through Sunday.

"Sacheon-ga" is an original work written by Lee Ja-ram, 32 that adapts Bertolt Brecht's "The Good Person of Szechwan" in the form of pansori. Pansori is a traditional form of narrative music in Korea, performed by a solo singer who plays all the characters in the story accompanied by a drummer.

Lee is one of the most prominent young Korean traditional musicians, who completed singing pansori pieces "Chunhyang-ga", "Sugung-ga", "Jeokbyeok-ga" and "Simcheong-ga".

Instead of remaining a talented Korean classical musician, Lee has broadened her boundaries by organizing a folk rock band Amado Lee Ja-ram Band and joining the musical "Seopyeonje" as music director and lead actress. 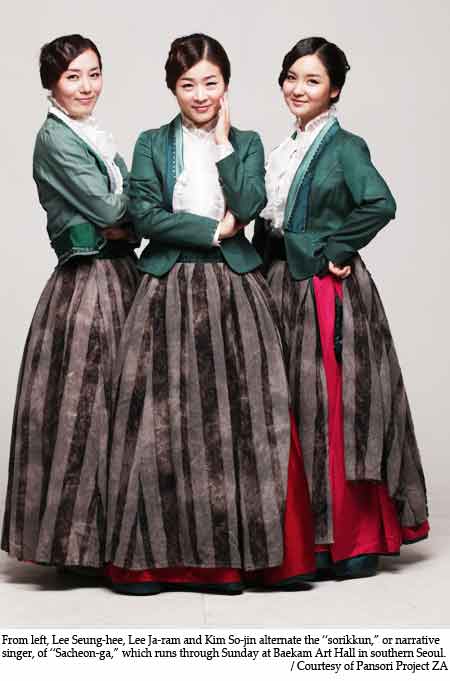 Lee is also interested in adding modernity to pansori and "Sacheon-ga" came from such an effort.

The epic theater of Brecht is reinterpreted into a setting in an imaginary Korean city of Sacheon.

The basic outline is similar to "The Good Person", revolving around a "good" woman, whose favor is abused and later forced to invent a male cousin alter ego to protect herself.

The tobacco shop and factory in the original work is turned into a snack bar and "gimbap" (seaweed rice roll) factory, respectively.
The sorikkun alone plays more than 10 characters. Fat and unemployed Sun-deok is Lee's adaptation of Shen Te, the young prostitute in "The Good Person", while the handsome invented cousin Shui Ta is renamed Jae-su. The pilot-to-be Yang Sun becomes Gyeon-sik, a man dreaming of becoming a sommelier in "Sacheon-ga".

Ordinary pansori is usually performed by a single sorikkun accompanied by a sole barrel drum, but "Sacheon-ga" incorporates the rich sound of a bass, djembe, dulcimer-like instrument "yanggeum" and other percussion instruments, creating a harmony between Korean and Western music. The soft twang of a "janggu" (hour glass-shaped drum) goes well with the sound of an electric bass.

Three actors join the show performing the three gods representing Buddhism, Christianity and Confucianism during the interludes. "The change of environment surrounding Sun-deok is important in this play and we try to express it through these ridiculous, comic gods", said Nam In-woo, director of "Sacheon-ga".

Lee alternates the role with two other singers _ Lee Seung-hee and Kim So-jin, not just because the 140-minute performance is physically challenging, but she wants to pass down the show.

Lee Seung-hee excels in rich high notes, while Kim's low-pitched tone is more specialized. Though they perform from the same script, their characters are slightly different.

"Ja-ram and I thought passing down the show is essential in pansori and we held an audition in 2009 to find these gems. We hope 'Sacheon-ga' continues to be staged some 20 years later by other sorikkun", the director said.

"Sacheon-ga" is also acclaimed overseas. It was showcased at the Performing Arts Market in Seoul in 2009 and invited to the International Theater Festival Kontakt, Poland, in 2010, where Lee earned the Best Actress Award. This year, "Sacheon-ga" was performed at Martin E. Segal Theatre Center in New York, U.S. and National Theatre in Paris, France. In July, they performed about a month at Festival d'Avignon Off, one of the biggest art festivals in France.

"I think contemporaneity is the key in overseas success. The storyline is universal, covering daily life to politics and religious problems, and we have subtitles to supplement the understanding", Nam said. "I hope we could stage this in Germany, the home of Brecht, someday".