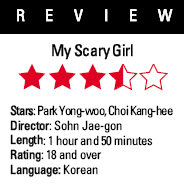 What do you get when you mix a Romantic Comedy with a thriller, combining "lovey dovey" scenes involving a couple in love with those of bloody murders?

At a glance, the movie tries to tell a cliche love story between a naïve man and attractive woman, but soon it enjoys a sudden ride of twists and parodies on conventions and formulas too often used in many romantic comedies.

Directed by Son Jae-gon, the movie revolves around Hwang Dae-woo (played by Park Yong-woo), a man in his early 30s, who becomes desperate to find a girl to go out with. He has never been in a relationship with a girl.

He is handsome and has a decent job as an English literature professor at university, but the problem is he is cranky, rational _ not the type for romances with the opposite sex.

But things change when Lee Mi-na (by Choi Kang-hee) moves into the downstairs apartment, and he bravely asks her out.

He is so clumsy at dating that he has to practice telling jokes, but keeps bungling them. But Mi-na becomes attracted to him as she can see the sincerity and kindness hidden deep in his heart.

Now all this must sound really familiar, and a romance seems about to start. But after some 30-minutes of preparation for a take off, the movie makes a sudden turn towards black comedy as Mi-na's deadly secrets are revealed.

Although she says she plans to go to Italy to continue her art degree, she doesn't know who Piet Mondrian is, whose work hangs on her bedroom wall.

Strange men keep visiting her. She goes out at night carrying a huge bag and spade, and returns home with her pants dirty.

What should Hwang do? Should he give up his once-in-lifetime chance to have a girlfriend because of her secrecy?

If you liked the 2002 comedy film Fun Movie, which parodied popular local movies, you will definitely find this film amusing. Director Son, who wrote the script for Fun Movie, has upgraded his talents with "My Scary Girl".

The interesting plot couldn't have been successfully delivered without excellent acting by actors playing the wacky couple.

A loud applause for Park, who after playing serious roles in such movies as last year's successful historical piece "Blood Rain", showed his ability to successfully play a different kind of role.

"'Scary' Turns Love Comedy on Its Head"
by HanCinema is licensed under a Creative Commons Attribution-Share Alike 3.0 Unported License.
Based on a work from this source