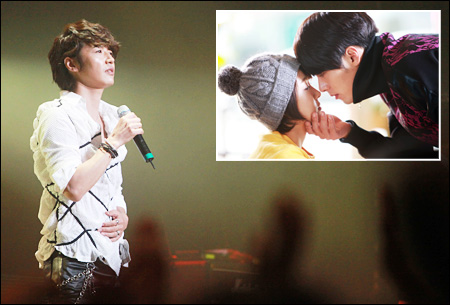 Music from "Secret Garden", an SBS drama sweeping the nation featuring the love story of Kim Ju-won (Hyun Bin) and Gil Ra-im (Ha Ji-won), will be performed live in a concert featuring songs from the soundtrack.

The audience can listen to the live version of the music that enriched the soap opera as well as seeing the actors and singers in person at the Dome Art Hall at Children's Grand Park, Saturday at 8 p.m.

The concert will bring the story of a rich but arrogant president of a department store Kim and a brave stunt woman Gil and their soul-switching on stage through music.

Singer Baek Ji-young and R&B group 4Men will perform at the concert to give a live rendition of the songs that featured in the drama. Baek will sing "That Woman", the main title of the soap opera, and 4Men will deliver "Here I AM."

Actor Yoon Sang-hyun, who stars in the drama as hallyu (Korean wave) singer Oska will sing the songs of the character such as "Watching" and a brand-new song for the concert. Yoon has already released singles in both Korea and Japan and has been recognized as a talented singer.

Prior to the concert, Yoon will film a scene during Oska's concert for the last episode of the drama, which will be aired Sunday.

Hyeon, the protagonist, will also appear on stage for a short talk with the audience.

Costumes and props from the drama will be given to winners of a lucky draw. Hyeon's famous sparkling training gear is one of the prizes.

The concert is scheduled to end at 10 p.m., so the audience can watch the 15th episode of the drama together at the venue.

The ticket costs from 55,000 won to 99,000 won. "Though the ticket might seem expensive, it is a separate concert from the drama, complete by itself. We will put on a performance worth the price", an official of the concert planning agency Shownote said.

"'Secret Garden' soundtrack live in concert "
by HanCinema is licensed under a Creative Commons Attribution-Share Alike 3.0 Unported License.
Based on a work from this source