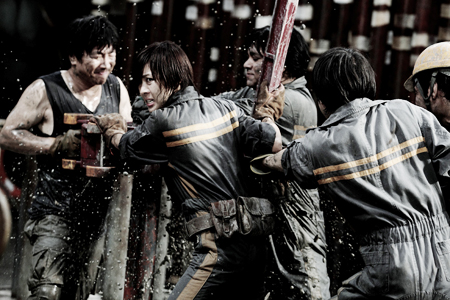 The late legendary producer Samuel Goldwyn once said that Hollywood filmmakers "remain little more than glassblowers, huffing and puffing and blowing up slender ideas - their own or others - into some sort of shape for the screen. What has happened to fresh, honest, vital, original writing for the screen?".

Sadly, the bigger the budget and the more ambitious the initiatives are becoming for Korean cinema, the less creative the script seems to be, as is the case for the country's first 3D IMAX creature feature "Sector 7".

But before looking into what went wrong with the film, it is necessary to consider past CGI monster projects. In 2006, Bong Joon-ho rewrote local film history with "The Host", which featured groundbreaking visuals courtesy of the U.S. Orphanage Studio ("Sin City", 2005). It showed that such commercial fare is no longer monopolized by Hollywood, and still remains the highest grossing Korean film of all time.

Then came "D-War" (2007), which created something all together new by showing that it is possible to make innovative CGI monsters at home. But the Shim Hyung-rae franchise was an utter failure because it sought to entertain by insulting the intelligence of the average viewer. "Chaw" (2009), on the other hand, did come up with something more substantial in terms of storyline, but had to outsource to overseas talent, only to render a half-believable, man-eating giant hog.

In 2009, Korean filmmakers' pride was seriously hurt when James Cameron's "Avatar" beat the admission record set by "The Host" to become the most watched film in Korean box office history. And so star producer JK Youn (whose other film, "Quick", is currently trailblazing through the box office rankings) and director Kim Ji-hoon ("May 18", 2007) teamed up with Seoul-based Mofac Studio to create a monster that is not only believable in a super gory, nasty way, but also transforms to become even gorier and nastier. What's more, it stars in some 70 percent of the 10 billion-won film.

"Sector 7" has impeccable, if not astonishing, production values, and it's no surprise that a short clip ensured sales to 46 international distributors. The 3D depth, like "Avatar", is rather shallow, but provides for a more comfortable visual experience.

Unfortunately, however, the irony-free, risible dialogue and cheap humor seriously detract from the entertainment. It is true that the greatest stories are often quite simple, but it seems the filmmakers have underestimated how smart audiences are; that they cannot be hypnotized by fantastic visuals to overlook a depthless narrative.

The film is essentially a cat-and-mouse hunt between workers stranded on an oil rig and a mysterious sea creature that is the result of foolish human doings, sort of like in "The Host" and "Chaw". Yet, the reason why the monster is out to eat man is unclear. And the characters are too busy running away to provide the audience a chance to warm to them.

Leading lady Ha Ji-won has become dubbed "Korea's Angelina Jolie" for pulling off motorcycle stunts herself; this female warrior type, just like the 3D technology employed, is unprecedented here and the actress brings her usual feistiness and zest to the role. But the limited script makes her but a one-dimensional character who, other else than being obsessed with procuring oil, plays hard to get with her boyfriend (heartthrob Oh Ji-ho).

Veteran actor Ahn Sung-ki, meanwhile, holds the secret to the monster's identity, but the film makes little effort to delve into his character's history. Funnymen Park Chul-min and Song Sae-byeok, meanwhile, who have evoked humor with their mere presence in their previous films, aren't very funny at all.

In theaters on Aug. 4. Distributed by CJ E&M Pictures.

One-and-a-half stars out of four.

"'Sector 7': groundbreaking tech, groundless drama"
by HanCinema is licensed under a Creative Commons Attribution-Share Alike 3.0 Unported License.
Based on a work from this source