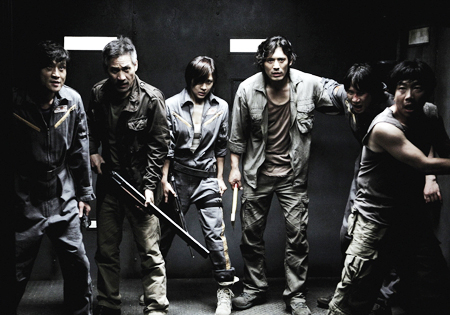 A scene from the movie "Sector 7", which became the highest grossing Korean film to have opened in China. / Courtesy of CJ E&M Pictures

The film, about an oil rig crew fighting a bloodthirsty sea creature, brought in over 20 million yuan (US$3.15 Million) after just one week in theaters as of Dec. 14. This beats previous Chinese box office records set by Korean releases. In 2007 the romantic comedy "200 Pounds Beauty" took 16 million yuan while the creature thriller "The Host" earned 14 million yuan.

"Sector 7" opened across some 4,000 screens in the neighboring Asian country on Dec. 6 and topped Hollywood franchises such as Spielberg's "The Adventures of Tintin" to rank second in the box office.

The film's distributor says that "Sector 7" was widely marketed as Asia's first mega-budget 3D spectacle. The film's heroine Ha Ji-won took part in rigorous promotional tours across Beijing and Shanghai, holding press events and special meetings with fans ahead of its release.

"The Chinese press took interest in the fact that a beautiful female character fights to survive against a mysterious monster, and it helped that Ha Ji-won recently became popular in China through the TV series "Secret Garden"," said CJ E&M Pictures. In addition, top Chinese pop star Vision Wei sang the Chinese version of the film's theme song, "Run Away", adding to its publicity.

"Though 'Sector 7' did not do very well domestically, it is getting a second chance overseas", said the film's distributor. The 14 billion won project yielded disappointing results in the local box office, attracting just 2.2 million viewers.

"'Sector 7' is highest grossing Korean film in China"
by HanCinema is licensed under a Creative Commons Attribution-Share Alike 3.0 Unported License.
Based on a work from this source