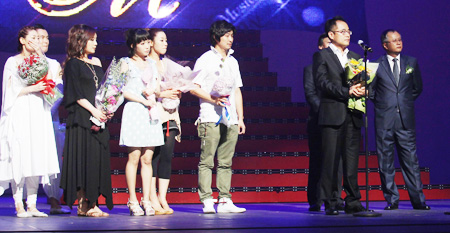 Cho Kwang-hwa, second from right, writer of the musical "Seopyeonje - Musical", speaks after receiving the Best Original Musical trophy at the fifth Musical Awards, at the Sejong Center for the Performing Arts, Seoul, Tuesday. / Courtesy of the Musical Awards

The musical, based on the 1976 novel of the same title by Lee Cheong-joon and the 1993 movie, portrays the life and bitter sorrow of a "sorikkun", or traditional singer. Rather than reproducing traditional Korean style on stage, its unique abstract costumes and set added a modern twist to the musical and imbued a new life to the traditional vocal music of "pansori".

Cho Kwang-hwa, the writer of the musical, received the award instead of the producer who was found dead in an apparent suicide in May. The producer was said to be in financial difficulties after the commercial failure of the musical. Cho said his death was a tragedy for the Korean musical scene. "'Seopyoenje' was unappreciated since it was about pansori, an old-fashioned subject", he said. "We felt as if we were in an independence movement".

Actress Cha Ji-yeon and Lee Ja-ram, who alternated the role of protagonist Song-hwa, received Best Performance by an Actress in a Leading Role and Best Performance by a New Actress, respectively. Cha made an impression on the awards ceremony when she performed a scene from the musical singing "Simcheongga".

Cho Seung-woo won the Best Male Actor with his powerful yet delicate portrayal of the Janus-faced Dr. Jekyll in "Jekyll and Hyde".

Kim Min-ki, president of the Hakchon Theater, received the Achievement Award, in appreciation of his service to the theater scene for over 20 years, including the production of "Line 1".

"'Seopyeonje - Musical' named best homegrown show at Musical Awards"
by HanCinema is licensed under a Creative Commons Attribution-Share Alike 3.0 Unported License.
Based on a work from this source