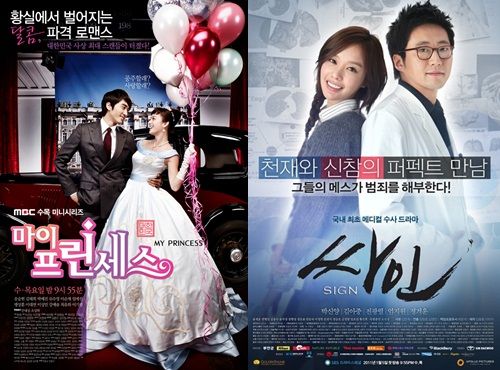 Two new Wed.Thu dramas had a close lead from their first episodes. SBS "Sign" and MBC "My Princess" viewer ratings came out similar.

According to AGB Nielson Media Research, SBS "Sign" that was aired on the 5th, took the first place as it recorded 16.1% in national ratings.

SBS "My Princess" that was aired at similar time, recorded 15.9% and didn't show much difference from "Sign".

KBS 2TV "President" however, recorded 8.9%, and was the lowest rating drama in that time schedule.

Therefore, SBS and MBC are expected to have a strong battle for Wednesdays and Thursdays.

"'Sign' vs 'My Princess' first broadcast viewer ratings close lead"
by HanCinema is licensed under a Creative Commons Attribution-Share Alike 3.0 Unported License.
Based on a work from this source