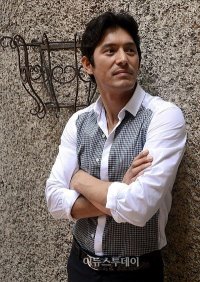 On March 11th, Oh Ji-ho visited the children's wing at Seoul National University Hospital where he met 3-year old Ha-neul, who has never been out of the hospital due to a congenital illness called 'tufting enteropathy'. Tufting enteropathy sometimes causes irreversible intestinal failure and prevents patients from absorbing and digesting their food. There are only three people in Korea with this rare disease.

Oh Ji-ho was originally at the hospital for the filming of the the March 15th broadcast of "Love's Request" (KBS 1TV). He stayed in the children's wing long after the shoot was over, making helium-filled balloons for the children and consoling their guardians.

In "Single Dad in Love", Oh Ji-ho plays a character who goes to any length to ensure the care of his son recently diagnosed with a brain tumor.