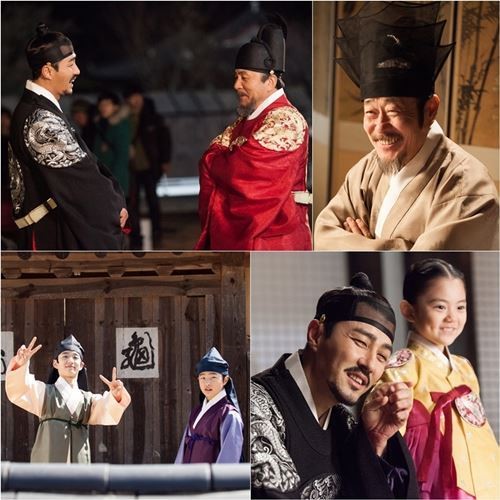 "Splendid Politics" Cha Seung-won's heartwarming smile touched the heart of those around him.

In the photos, Cha Seung-won (Gwang Hae) and Park Young-gyu (Seonjo) are having a chat during the break in between the filming. The two will show the fierce and intense confrontation in the drama.

Also another photo shows that Cha Seung-won with his eyes closed is holding the child actor Heo Jung-eun (young Jeong-myeong princess)'s little hands. The scene melts your hearts where he wears the warm fatherly smile holding Heo Jung-eun's little hands on his cheek as happy as someone who owned the whole world.

An official from the production team said, "We have a great chemistry among the actors. The set is filled up with the heartwarming vibe" and "With such a great vibe, it brings out the best interactions among the actors. We ask for much support".

"'Splendid Politics' Cha Seung-won's heartwarming fatherly smile to brighten up the set"
by HanCinema is licensed under a Creative Commons Attribution-Share Alike 3.0 Unported License.
Based on a work from this source