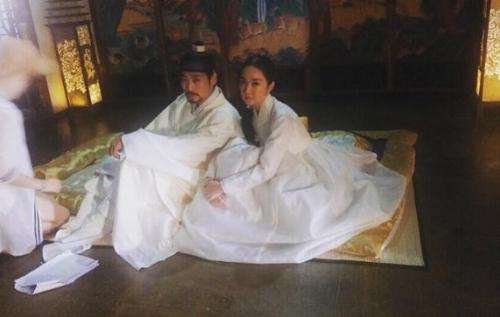 Splendid Politics' Kim Min-seo posted a photo of her with Kim Jae-won.

On the 27th via her Instagram account, she posted a photo with the tagline, "Injo, Spooky couple, jelly couple, fun all-nighter on the set~".

In the photo, Kim Min-seo and Kim Jae-won gazed blankly at the camera wearing only white undergarments. The dark lighting on the set made the photo spookier.

On the Monday-Tuesday drama "Splendid Politics", Kim Jae-won plays Injo, the eldest son of King Sunjo's 5th son. He exiles price Gwanghae via a coup and becomes the 16th king of Joseon. Kim Min-seo plays his concubine Jo who entered the palace initially as a servant and is angling to be queen.

MBC's Monday-Tuesday drama "Splendid Politics" will air its 32nd episode at 10 PM on the 28th.

"'Spooky couple': "Splendid Politics" Kim Min-seo & Kim Jae-won, a photo of their all-nighter in white undergarments"
by HanCinema is licensed under a Creative Commons Attribution-Share Alike 3.0 Unported License.
Based on a work from this source