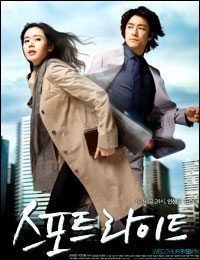 With MBC's new drama "Spotlight", viewers will get a glimpse into the lives of broadcast news reporters covering the city beat.

"Spotlight" depicts the journey toward success of a passionate city desk reporter Seo Woo-jin, played by top actress Son Ye-jin. Ji Jin-hee from the hit drama "Jewel in the Palace" ("Dae Jang Geum") will star as her strict, yet caring mentor, Oh Tae-seok. The drama will follow Seo's drudge through the grind to eventually become an anchorwoman.

At the press conference held last week in southern Seoul, reporters and camera crews swarmed the room for a shot of Son.

"I read the synopsis and had a strong impression. I especially liked the fact that (Seo) continues to strive to achieve her dreams. I was captivated by her passion and energy", Son said.

A short clip of the drama drew laughter among reporters when Ji said "You call yourself a reporter?" hinting that the crew meant it when they said they were aiming for a "real" reporter drama.

"We tried to break away from the cliche love scenes this time. We focused more on their stress as human beings and reporters, not just their affections toward each other", said Lee Ki-won, the writer of the drama. Lee tasted success last year with his strong presentation of the political world of doctors through the medical drama, "White Tower" (2007).

Producer Kim Do-hoon explained that reality was of foremost importance in "Spotlight". "We'll be showing episodes that might really happen in real life. I think this is hard because we never had a drama like this before. Being the first is always difficult because there isn't much to compare with".

The actors also mentioned their share of reality, as many of them actually spent their days and nights with real reporters.

"I followed a reporter for a day. At first, I didn't believe it when they told me they didn't have time to bathe. But I realized they really didn't have the time to even wash their face", said Jin Gu who plays fellow reporter Lee Soon-cheol.

As top celebrities, actors bump into reporters frequently, whether they enjoy it or not. When asked if their opinions toward them changed, Ji Jin-hee admitted that it was all about the choice of words.

"I realized the importance of my words. The right words can turn you into a hero but using the wrong words will have you fall. I told myself to be careful from now on", he laughed.

"I started to understand their struggle to capture the truth for the public. Now I feel very pressured", Son added.

This is the first time for a television program to solely delve deep into the lives of broadcast news reporters, although there were some dramas and movies that briefly introduced the profession. In order to bring reality to the small screen, some scenes were shot at the real MBC News Desk set in Yeouido, Seoul, while MBC city desk news reporters will be adding reality by appearing as well.

"We'll introduce the dilemmas reporters face as people with feelings and also as people who have to dig out the truth. There is a symbiotic relationship between the two", Son said.

"'Spotlight' Shows Lives of Reporters"
by HanCinema is licensed under a Creative Commons Attribution-Share Alike 3.0 Unported License.
Based on a work from this source