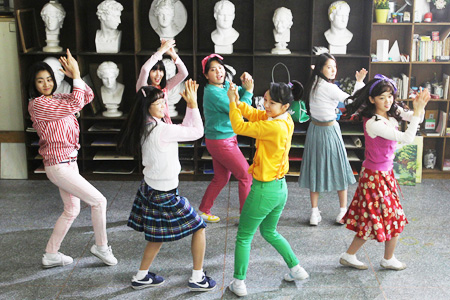 A scene from the teen drama "Sunny - 2010", which evokes the nostalgia of 1980s pop culture and the wonders of youth / Courtesy of CJ E&M

Whether you feed on contemporary gum-pop or remain strictly '80s, the iridescently "retro-licious" film "Sunny - 2010" will brighten up your day. Besides, 2NE1 sports the double denim look Madonna pulled off back then.

The film captures the restlessness of youth as much as it evokes the nostalgic pangs of middle age, appealing to teenagers and older viewers alike. The coming-of-age drama sees a timely release for Family Month here, but its universal themes would aptly pave possibilities of a wider exposure.

When small-town girl Na-mi moves to the big city, she cannot but feel intimidated by the Seoul girls, with their big, hairsprayed hair and Nike shoes. But Chun-hwa, the toughest girl in class, takes an interest in our shy, heavily-accented protagonist, and saves her from mean jokes.

Twenty-five years down the road, Na-mi leads a content life as a mother and wife. And yet, something feels missing.

One day she bumps into Chun-hwa at the hospital and learns that her friend has only two months left to live. In order to fulfill Chun-hwa's last wish, Na-mi tries to get back in touch with the rest of the Sunny clan.

Director Kang Hyeong-cheol showed the potential of mid-budget family comedies with his debut piece "Scandal Makers" ("Speedy Scandal"), and brings yet another engaging story. Like his first film, "Sunny - 2010" also takes place mostly indoors, and the filmmaker opts for speedy scene sequences to show how Na-mi's life, while peaceful, is somehow lacking.

As Na-mi sets out to track down her old buddies, the film travels back and forth between the past and present. The journey across time naturally features plenty of '80s music for a wistful finish. It's not particularly new or creative, but well executed, based on a solid script.

Yet Na-mi's mission involves less-than-pleasant moments, and the camera mercilessly reveals the long-faded innocence of a middle-aged woman. The juxtaposition allows The Wonder Years to shine all the more ― when sneaking a bite from lunch boxes or goofing around with broomsticks inspired giggles.

"Sunny - 2010" also paints a portrait of the changing social climate, from the '80s democratization movements to the provocative TV dramas that mark the millennium. But the film remains strictly family-friendly, and tames down past moments of turbulence.

The film also chooses to give teenage angst a slapstick treatment. Nevertheless it does not ignore the context of a rather tragic history, giving birth to a style of tragicomedy rarely seen in Korean cinema.

Both the young and elder actresses bring zest to the narrative. Min Hyo-rin particularly displays a strong presence onscreen as the teenage Su-ji, while Shim Eun-kyung and Yoo Ho-jung bring weight as the grownup versions.

"Sunny - 2010", running 124 minutes, feels a tad long. It drags somewhat in the latter half, which culminates in a rather sappy finale. Nevertheless it's one of those feel-good movies you'd want to share with truly great friends ― the ones that are hard to find and impossible to forget.

Three out of four stars.

"'Sunny - 2010 - 2010' brims with 1980s retro fun"
by HanCinema is licensed under a Creative Commons Attribution-Share Alike 3.0 Unported License.
Based on a work from this source