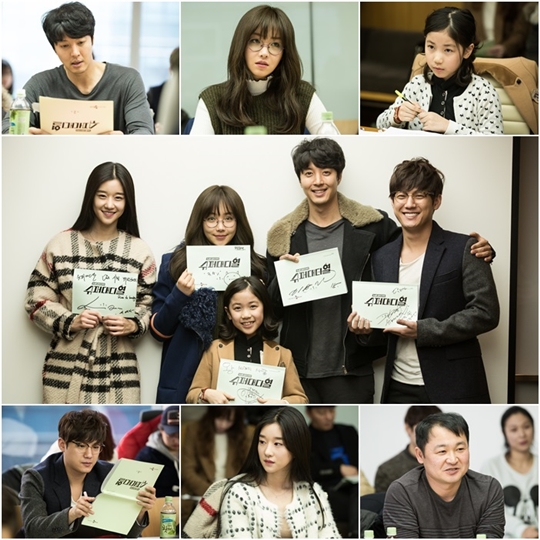 'Super Daddy Yeol' is a drama depicting how two adults and a child go through a series of events to form a family.

Han Yeol (Lee Dong-gun), who once dreamt of a happy family but later has decided to live as a single guy forever after he was rejected by Dr. Cha Mi-rae, who is a single mom, and Cha Mi-rae, who reappears in front of him in 10 years and tries to marry him, and the annoying nine year old child, (Lee Re), who just wants a dad, are those three people in this struggle.

The script reading session was held in a conference room in CJ E&M center, Sangam-dong, Seoul. The released photos show Lee Dong-gun, who comes back to the small screen in several years, and Lee Yu-ri, who proved herself as one of the most wanted actresses on small screen since she was awarded MBC Grand Drama Award last year.

Lee Re, the talented child actor from films, 'A Perfect Way to Steal a Dog' and "Hope" took part in the script reading session as well.

Seo Jun-young will play Dr. Shin, who likes Cha Mi-rae. The character is an intelligent and pure-hearted guy. Seo Ye-ji took on the role as Hwang Ji-ye, who is in one-sided love with Han Yeol, will show unexpected cheerful acting performance contrasted to her appearance.

Director Song Hyeon-wook, who led the script reading session, said, "I feel rewarded for the busy and tough preparation time spent. I am fully satisfied and feel confident as I am here with all these excellent actors. I will do my best to deliver fun and happiness to viewers".

'Super Daddy Yeol' started its first filming on February 12th. Director Song Hyeon-wook, who previously delivered bountiful emotion and fun through 'Marriage Over Love', will be able to deliver the warmhearted drama along with laughter to the viewers this time again.