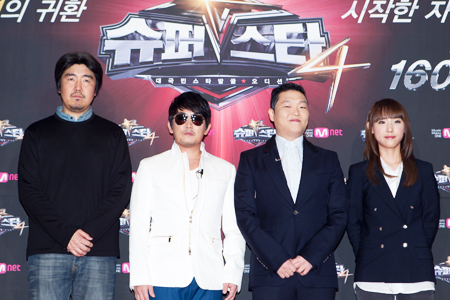 The ambitious project, begun by channel Mnet to discover future divas and rock stars in 2009, has managed to bring finalists such as Huh Gak and Ulala Session to stardom. Since its launch, similar programs have mushroomed including "Survival Audition K-Pop Star", "Star Audition: The Great Birth", and "The Voice Korea".

At the press conference at CJ E&M Center in Sangam-dong, northern Seoul, on Wednesday, the renewed panel members vowed to differ. All eyes were on the new judge Psy. The rapper-producer is replacing long-term judge and singer-songwriter Yoon Jong-shin. "Honestly, I was so touched by Ulala Session last year and I wanted to take part in bringing people like them to spotlight", he said.

With much focus on the vocal ability of the participants, inviting in the musician known for his showy performances and fast beat is expected to add refreshing perspective. "I try to listen and make diverse music. I want to focus on dance and performance aspects of the contestants", he said.

"People assume that if you are heavy on choreography, you can't sing well. I know from over 10 years of experience that singing and dancing at the same time takes great skill", he added. 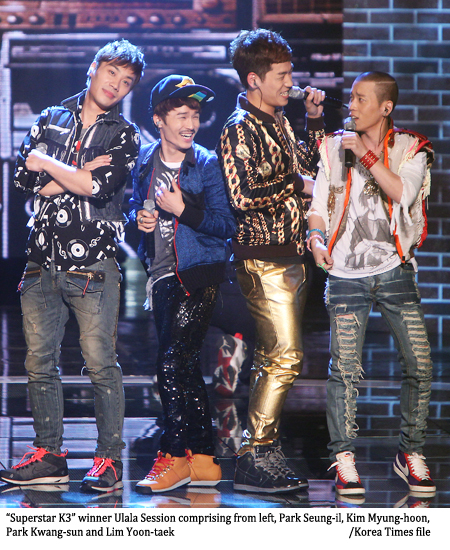 Lee Seung-chul, who will remain on the panel, is pleased with his new counterpart. "I thought about leaving the program with Yoon. But after much consideration, I decided to continue this endeavor of finding talent for Korea", he said. The production staff is still looking for a third judge, who will be female.

Kim Ki-woong, chief producer of the program, plans to differentiate "Superstar K4" from other shows with know-how accumulated from the last three seasons. "The winner of this season will receive 500 million won, same as last season. I am aware that there is a program paying 1 billion won. I don't think that's what a winner of an audition program deserves", Kim stressed. This year's winner will receive 500 million won and receive support in producing a debut album. The survivor will be invited to MAMA, Mnetannual award ceremony. New program "Global Super Idol" with Tony, a former member of H.O.T. as host, promises 1 billion won to its winner.

Kim Tae-eun-I, the program's new producer, said that her team is striving to break the predictable storylines of audition shows by adding diverse challenges. "We started preparing for the new season as the last one wrapped up. Other shows recruit from a specific demographic, be it housewives or K-pop idol materials. We want to find a well-rounded star and become a sort of festival for the Korean public", she said.

"Superstar K3" received much attention as it featured not only solo musicians but also bands. Winner Ulala Session has four members and they are working on an album to hit the market in April. Runner-up, three-piece Busker Busker, is set to release their first album today.

"Superstar K4" started accepting phone applications for auditions on March 8. As of Wednesday, 400,000 people had signed up including the controversial lawmaker Kang Yong-suk. Kim Tae-eun-I said the politician will not receive any favors or disadvantages due to his status. "Yes, Kang signed up for an audition. He will go through the same process as any other applicant. Whether we will get to see him on TV depends solely on how he performs. "

The production crew will visit eight cities in Korea (Seoul, Incheon, Wonju, Gwangju, Daejeon, Daegu, Busan, and Jeju City), starting in April. They will also recruit from the United States and neighboring Asian countries. After the preliminary auditions, the show will start on Aug. 17.

Since its inception in 2009, applicants for the auditions increased exponentially. rising almost twofold to 1.34 million in 2010 and to 1.97 million in 2011. The budget for the program has snowballed from 4 billion won in 2009 to 10 billion won for the third season in 2011.

"'Superstar K' returns with fourth season"
by HanCinema is licensed under a Creative Commons Attribution-Share Alike 3.0 Unported License.
Based on a work from this source