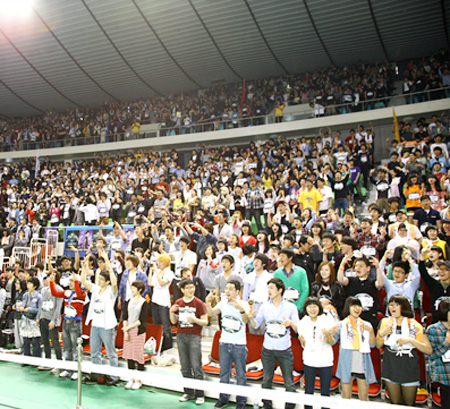 Aspiring singers take part in an open auditon for 'Superstar K 3' in Daegu on May 5. / Courtesy of Mnet

"Superstar K" will hold auditions in Japan, China and the United States this summer to select contestants for the third season of the talent show, Mnet said Tuesday.

The popular cable show modeled after "American Idol" will hold sessions in Tokyo, Sendai and Osaka, as well as Beijing and New York in June. Auditions for local talent are currently being held in eight locations around Korea.

"Considering how travel remains difficult in eastern Japan after the earthquakes, we decided to go there ourselves", said organizers of the program through a press release.

Participants in each city will take part in a two-part screening process. Contenders from Korea and Japan will compete against one another in a third round, while those that make the cut will vie in a fourth and final screening against participants from New York and Beijing.

The latter, called "Super Week", will be held in Seoul in August, and organizers will provide transportation and accommodation for those traveling from overseas as well as those from Jeju Island.

"We launched 'Superstar K' in order to give a chance to aspiring singers, mostly comprising of people who have wanted to sing but didn't have the opportunity to do so. We decided to provide these services so that people can participate more easily", said Kim Ki-woong, director of "Superstar K".

The program's popularity spread overseas, particularly in Japan. Some 90 percent of applicants from the neighboring coutnry this year are Japanese, unlike the strong ethnic Korean demographics of hopefuls in Beijing and New York, said Mnet.

The winner will be entitled to a cash prize of $500,000, concert opportunities and a recording contract.

"'Superstar K' to hold auditions overseas"
by HanCinema is licensed under a Creative Commons Attribution-Share Alike 3.0 Unported License.
Based on a work from this source