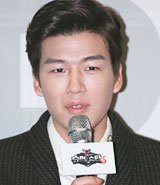 Kwak Jin-eon, the winner of Mnet's audition-based talent show "Superstar K", donated the W300 million in prize money he earned on the show in October last year to a charity, it belatedly revealed on Tuesday (US$1=W1,173).

Kwak apparently decided to donate the money to help people in need in Gangwon Province as his mother who runs after-school classes there encouraged him to do so.

Meanwhile, he released his debut album on Tuesday and is set to work on promoting it.

"'Superstar K' Winner Quietly Donated Prize Money to Charity"
by HanCinema is licensed under a Creative Commons Attribution-Share Alike 3.0 Unported License.
Based on a work from this source