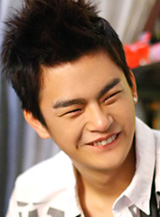 Seo's singing and guitar skills gave him a strong edge during casting for the show.

The soap will also feature actor Jang Keun-suk, and Yoona from girl group Girls' Generation, both of whom are rising Korean Wave stars in Japan. The melodrama jumps back and forth between the 1970s and the present.

It is directed by Yoon Seok-ho, who has made a string of hits including "Winter Sonata" and "Autumn in my Heart". The combination of Seo and a star-studded cast has already created something of a buzz ahead of its airing early next year.

"'Superstar K' Winner to Debut in Star-Filled TV Soap "
by HanCinema is licensed under a Creative Commons Attribution-Share Alike 3.0 Unported License.
Based on a work from this source