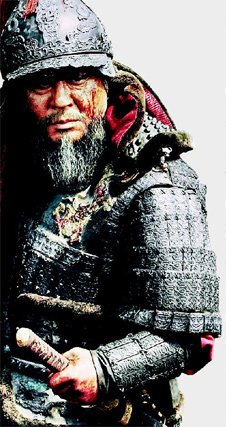 "The Admiral: Roaring Currents" set yet another record on Sunday by drawing 10 million viewers in just 12 days, almost halving the previous record.

"The Admiral: Roaring Currents" is only the 10th Korean movie and the 12th from anywhere to lure 10 million cinemagoers here. But it is already the second this year after "Frozen".

The historical spectacle has shattered every record in the book. It drew most viewers on the day of release on July 30 alone with 680,000, and less than two days after the release, it pulled 1 million viewers.

It then continued to attract every new million of viewers in the shortest time in Korean film history -- from 2 million in three days to 9 million in 11 days.

The film's total production cost was W18 billion (US$1=W1,037), so it has long exceeded the break-even point of 6 million viewers.

The Korean Film Council said the period epic had accumulated sales of W75.1 billion as of Saturday.

"Avatar" is still ahead here with 13.62 million viewers, but pre-bookings for "The Admiral: Roaring Currents" are up to 60 percent and theatre occupancy 70 to 80 percent.

At this rate, and with the Liberation Day holiday on Friday likely to drive even more people into cinemas, "Avatar's" mystical blue aliens may face a similar rout at the hands of naval hero Admiral Yi Sun-shin as the Japanese invaders in 1597.

"'The Admiral: Roaring Currents' Set for All-Time Box-Office Triumph"
by HanCinema is licensed under a Creative Commons Attribution-Share Alike 3.0 Unported License.
Based on a work from this source