'The Admiral: Roaring Currents' to Open in China on Nanjing Massacre Day 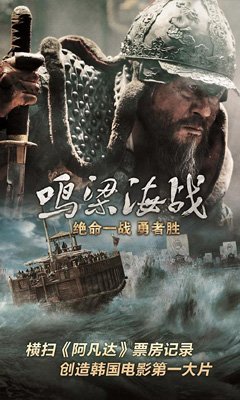 Chinese officials have pushed back the release in China of the Korean costume epic "The Admiral: Roaring Currents" to Dec. 12, the anniversary of the Nanjing massacre by Japanese soldiers during World War II.

The film, a rousing account of the astonishing victory over Japanese invaders by Admiral Yi Sun-shin, will open at 3,000 theaters across China on the eve of the anniversary, which is to be celebrated as a national holiday from this year.

Distributor CJ China on Tuesday said the subject of the film and the state of China-Japan relations made a late-November release date seem more appropriate, but Chinese officials wanted to push the date back.

Industry sources say Chinese officials may be hoping that moviegoers will be able to gain some sense of vindication in the face of Japanese atrocities by watching "The Admiral: Roaring Currents".

Chinese media reported the premiere date has changed to coincide with the start of school vacation.

"The Admiral: Roaring Currents" is the biggest blockbuster in Korean cinema history and drew more than 17 million viewers.