'The Attorney' VS 'The Admiral: Roaring Currents' at Blue Dragon Awards on the 17th 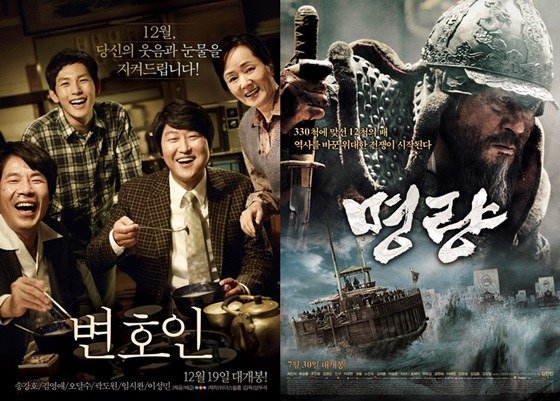 The second round of the award match between "The Attorney" and "The Admiral: Roaring Currents" will reveal the result today. At 5:30 PM on the 17th (local time in Korea), the 35th Blue Dragan Film Awards will take place in Sejong Cultural Center, Seoul.

At the 51st Daejong Awards on the 21st of last month, the two movies had a neck and neck competition over several awards. For Blue Dragon Awards, "The Attorney" has been nominated for 10 awards including Best Lead Actor, Best Supporting Actress, New Director Award, Best Scenario and etc. and "The Admiral: Roaring Currents" has been nominated for 7 awards including Best Picture, Best Director Award, Best Lead Actor and so on.

The movie, "A Hard Day", which had been invited to Canne Film Festival, has been nominated for 7 awards including Best Picture, Best Director, Best Lead Actor and Actress Awards. As the movie also scored three awards including Best Director, Best Camera, and Best Lighting from Daejong Awards, it is also drawing much attention if it will continue its winning position in Blue Dragon Awards as well.

"The Admiral: Roaring Currents", "The Attorney", "A Hard Day", ' Miss Granny' and "Whistle Blower" will compete for Best Picture. For Best Lead Actress, Kim Hee-ae of ' Thread of Lies', Son Ye-jin of "Blood and Ties", Shim Eun-kyung of 'Miss Granny', Jeon Do-yeon of "Way Back Home", and Chun Woo-hee of 'Han Gong-ju ' have been nominated.

Kwak Do-won of "The Attorney", Yoo Hae-jin of "Pirates", Lee Kyung-young of "Whistle Blower", Lee Sung-min of 'KUNDO : Age of the Rampant', Cho Jin-woong of "A Hard Day" have been nominated for Best Supporting Actors. Kim Young-ae of "The Attorney", Ra Mi-ran of 'My Love, My Bride - 2014', Lee Honey of 'Tazza: The Hidden Card, Cho Yeo-jeong of "Obsessed", Han Ye-ri of 'Haemoo' will complete for Best Supporting Actress.

For Best New Actors, Kim Woo-bin of 'Friends 2', Park Yoo-chun of 'Haemoo', Ahn Jae-hong of 'The King of Jokgu', Im Si-wan of "The Attorney", Choi Jin-hyuk of 'The Divine Move' will compete for the trophy. Kim Sae-ron of "A Girl at My Door", Kim Yoo-jung of 'Thread of Lies', Ryu Hye-young of 'My Dictator', Esom of 'Scarlet Innocence', and Lim Ji-yeon of "Obsessed" listed their names on the list for Best New Actress Awards.