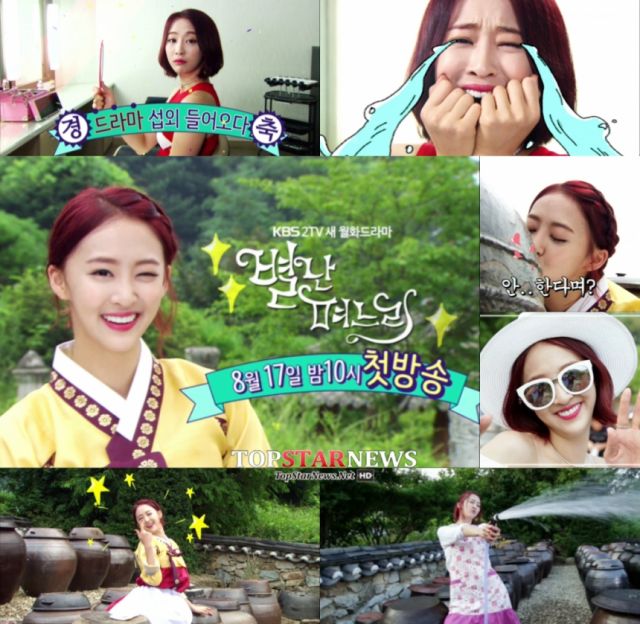 'Kim Dasom' has already started to show off her unstoppable charms beginning with the short teaser of 'The Eccentric Daughter-in-Law'.

The revealed teaser begins in a VIP waiting room of KBS. 'Kim Dasom' is checking her face on the mirror like any other girl group members. At this moment, a caption on the screen says "I heard you were offered a role for a drama?" And then "Congratulations. You've received a casting offer" runs on the screen along with the sound effect of firecrackers.

'Kim Dasom' looks so hopeful and asks, "A female leading role in a sad melodrama? I can cry well" and showed her crying acting.

However, when she was handed over the script of 'The Eccentric Daughter-in-Law', the situation turns around.

'Kim Dasom' gushes, "Are you kidding? I'm SISTAR. It's only been a very short while since I came back from jungle. You're telling me to go to countryside now?" and "I don't want to do this. I can't".

She dances around between the jars and smiles brightly in between her dance moves while she's completely soaked with sweats. At the ending scene, she winks toward the camera, while saying "Me? Eccentric daughter-in-law".

KBS 2TV's new Monday & Tuesday drama, 'The Eccentric Daughter-in-Law' depicts the battle between Oh In-yeong, a girl group member, who was cast to appear in an entertainment program featuring hands-on experience of a daughter-in-laws' life in a head family of a clan, and her pretend mother-in-law, Yang Choon-ja, who is the eldest daughter-in-law of the head family.

Through the eventful happenings between mother-in-law and daughter-in-law, the drama will depict conflicts and reconciliation in a family. It will begin after the completion of "Remember You".