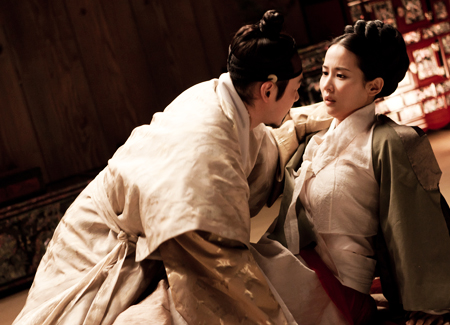 The king (Kim Dong- wook) courts his sister-in-law (Jo Yeo-jung), as she tries to resist, in a scene from the new film "The Emperor's Concubine". It opens in theaters nationwide on June 6.

Kim Dae-seung's period drama among the finest commercial films of the year. Nude scenes in Jeong Ji-woo's "A Muse" and Im Sang-soo's "The Taste of Money" recently generated an obscene amount of media frenzy.

Added to this is the new release "The Emperor's Concubine", the promotion of which has revolved around its graphic portrayal of sex and the naked lead actress Jo Yeo-jung ("The Servant" - 2010).

However, this singular focus seems misguided and demeaning to a film that offers much substance. Instead of a predictable tale recounting the various escapades and insatiable sexual appetite of a king, we get a perplexing film noir that explores obsessive-compulsive needs and their moral consequences. Its psychological depths demand multiple viewings.

The principal fault notwithstanding - women are given less complex roles than men by director/screenwriter Kim Dae-seung - the "The Emperor's Concubine" is one of the best commercial films this year. Weaker female roles in Korean movies remain a conspicuous problem in the male-dominated domestic industry.

The film begins with the queen mother and former concubine (Park Ji-young, "The Show Must Go on", 2006) in a precarious position of having no blood ties to the childless king (Jung Chan). She schemes to replace him with his stepbrother and her submissive young son on the throne (Kim Dong-wook, "Take Off", 2009). 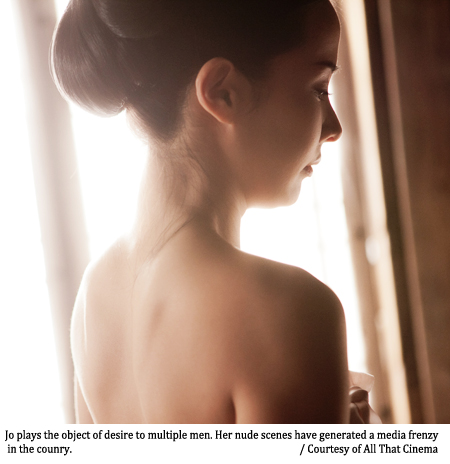 Indifferent to his mother's plans, the timid prince falls in a LOVE with Hwa-yeon (Jo), an aristocrat's daughter, who has already found a LOVE with Gwon-yu (Kim Min-joon, "a LOVE", 2007), a commoner. When her father decides to send her to the royal palace as a concubine, the two a LOVErs try to elope but are caught after their first night together. She only gives in to parental demands in quid pro quo for his life.

In the next five years, she produces a male heir, infuriating the queen mother. The latter poisons the king and finally puts her son on the throne, giving the ruthless matriarch firm control over the royal court. Hwa-yeon is moved to a closely-watched humble residence, but to save her child, she is willing to do anything. When reunited with her castrated former a LOVEr, who now works as a eunuch for her biggest nemesis, the queen regent's brother, she begs for help.

The story is like a compendium of outrageous royal intrigue and a LOVE stories - and it feels overwhelming. Added to stunning cinematography, silky costumes and most of all, the excellent acting of the cast members, are a lot to take in all at once. But the "Concubine's" intense, multi-textured journey is certainly worth the effort.

In his portrayal of the meek son who becomes a powerless king, 29-year-oldKim Dong-wook displays finesse and nuance. His naturalism convinces audiences as he transforms from a youth with a crush into one manically obsessed. His pitiful king wears an ill-fitting crown and makes endless mistakes. 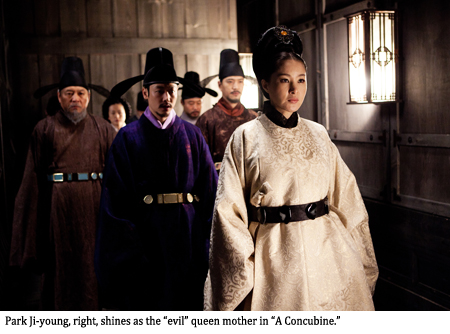 Kim Min-joon is given a much less interesting role but manages to shine in certain scenes, like the one on his deathbed, for instance. His character's journey from wild bad-boy heartthrob to repressed eunuch is a transformation he does not handle too well, especially given that he speaks in a consistently low-toned voice. But his performance is adequate.

Jo's evolution into a monster is less convincing, but this is a fault of the screenplay. She should have been given more time on screen as Hwa-yeon the innocent girl. More energy is concentrated in portraying her conniving ways. She always seems to be hiding something; she always looks guilty. Park's charismatic turn as the queen mother is also undercut by the screenwriters' one-dimensional conception of the evil queen.

Hwang Gi-sung's lush cinematography is a winner. The scenes in the secret underground prison are exemplary.

However, with so many plots and subplots proceeding in parallel, the narrative flow is awkward at times.

The most obvious breaks to the rhythm are the hyped-up nude scenes, which are given too much emphasis. "Here is a nude scene", the editing seems to shout. The finale, a slow zoom-out on a scene that mirrors one of Christianity's famous images, The Pieta, is another case in point. "Here is my message", the movie screams.

The director said that it is a reference to salvation - or the lack thereof - in all the characters' quests. Everyone ends up in self-destruction after a lifelong struggle to save themselves, their children or in the king's case, his a LOVE.

Finally, it must be noted that other allusions, like an official's bleak report about the construction along the Nakdong river - an obvious critique of the current administration's Four Rivers Project - is misplaced.

With countless psychological disturbances splattered on- and off-screen, why venture into yet another complex but unrelated issue?

"The Emperor's Concubine" opens in theaters nationwide on June 6. Runs 122 minutes. Rated 18 and over. Distributed by Lotte Entertainment.