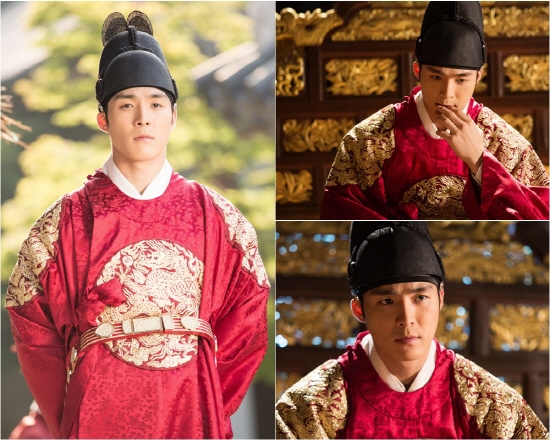 "The Flower in Prison" Seo Ha-joon showed off his solemn look in a red dragon robe.

MBC weekend drama, "The Flower in Prison" has unveiled the behind-the-scenes images of Seo Ha-joon from the filming set.

In the episode 15 last week, King Myeongjong confronted his mother Queen Munjeong, as he declared "I am the King of this country" The power struggle between King Myeonjong and Queen Munjeong will bring commotion to the political scene.

In the revealed still images, Seo Ha-joon in a red dragon robe foretells the emergence of a charismatic king. His gallant and dauntless presence is impressive. In another image, Seo Ha-joon is sitting on the dragon throne, deep in thoughts. His glaring decisive eyes are charismatic.

"The Flower in Prison" team said the attention on King Myeongjong from the drama fans are hot" and "King Myeongjong will show active movements to take back the power from Queen Munjeong in the upcoming episode".

"'The Flower in Prison' says King Myeongjong, Seo Ha-joon will raise tension"
by HanCinema is licensed under a Creative Commons Attribution-Share Alike 3.0 Unported License.
Based on a work from this source