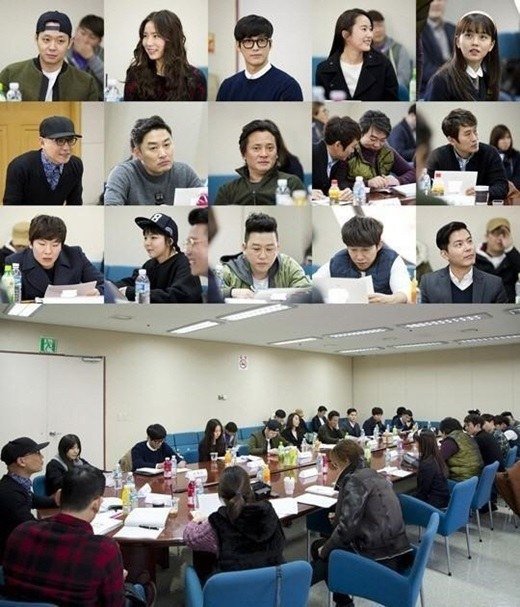 The first script reading session was held in the production center in Il-san while the production team and the entire cast gathered together in the beginning of March.

Executive producer Lee Yong Suk said, "The success experts including director, writer and the cast all joined together" and "Thanks to them, I expect a good drama will be born".

Director Baek mentioned about the fact that Park Yoo-chun and Kim So-hyun met again since 'The Rooftop Prince' by writer Lee Hee-myeong and complimented the writer by saying, "He is such an attractive man. If I were a woman, I'd want to date him".

Shin Se-kyung's script reading was humorous and full of emotions as she is a comedian in the drama. Kim Byung-ok, Lee Won-jong, and Jo Hee-bong kept presenting each comical act on the right timing.

The production team said, "Thanks to the harmonized and tense script reading by the entire cast of 'The Girl Who Sees Smells', we could not notice how fast time was passing" and "Once the drama has started, the viewers also will be so immersed into the drama that they would not notice time passing".

'The Girl Who Sees Smells' is a romantic comedy drama between Moo-gak (Park Yoo-chun), who cannot feel anything, and Cho-rim (Shin Se-kyung) with a supersense and its first episode will go on air on April 1st after the completion of 'Hyde, Jekyll and I'.

"'The Girl Who Sees Smells' Great chemistry between Park Yoo-chun and Shin Se-kyung raises levels of expectation on the drama"
by HanCinema is licensed under a Creative Commons Attribution-Share Alike 3.0 Unported License.
Based on a work from this source