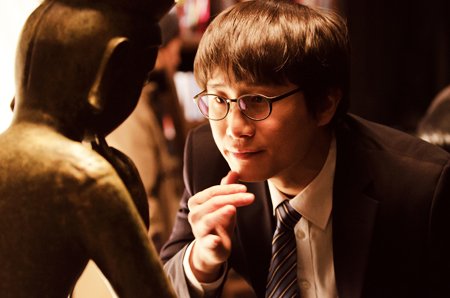 Actor Song Sae-byeok's character Dong-sik observes a Buddha sculpture's facial expression to master an effortless fake smile in a scene from the film "The Suck Up Project: Mr. XXX-Kisser". The satire on the Korean corporate culture by director Jung Seung-koo opens tomorrow in theaters nationwide. / Courtesy of Lotte Entertainment

After a rather quiet weekend without any strong releases, this week sees major Korean efforts vying for the box office throne. Among them, it appears only "The Suck Up Project: Mr. XXX-Kisser" by Jung Seung-koo has any chance of achieving that feat.

Despite its relative lack of star power, the satire on Korean corporate culture should resonate with virtually anyone who has had to resort to flattery at work.

And that is a lot of audience to take away from Park Cheol-kwan's messy "Miss Conspirator ("Miss Go" in the local title)", Kim-Jho Gwang-soo's gay-themed "Two Weddings and a Funeral" and SM Entertainment's unabashedly self-celebratory documentary "I AM."

"The Suck Up Project: Mr. XXX-Kisser" begins with the white-collar everyman Dong-sik (played brilliantly by Song Sae-byeok) who has made his living honestly thus far, following the teachings of his too-honest-for-good father. He pulls an all-nighter for a presentation to the CEO, but in the morning, the rest of his team is at a mountain waiting to run into the boss "by chance" and nonchalantly bring the matter up while climbing. Dong-sik continues to say what is on his mind and lands in one sticky situation after another.

When he is demoted to insurance salesman, he seeks help from a legendary silver-tongued master (the equally admirable Sung Dong-il), whose book about whispering sweet nothings into people's ears is prized like the Bible among his colleagues. 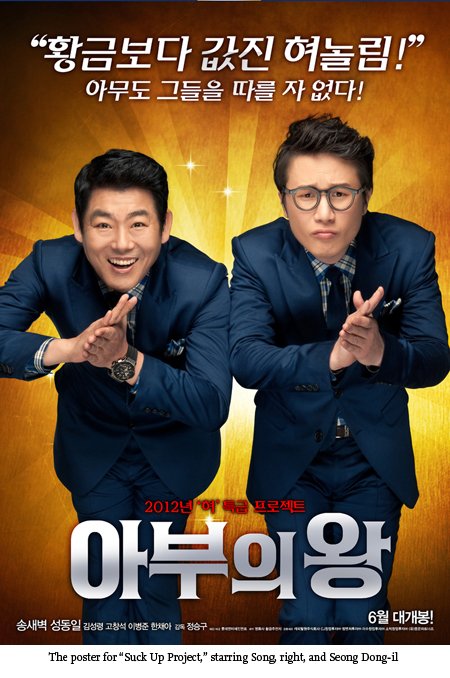 Meanwhile, Dong-sik's mother borrows from a loan shark and bribes the board of her husband's school in order to secure his promotion to principal, and the son is in a time crunch to master the rules of the flattery game to achieve success and repay the debts.

None of the subjects should be taken lightly in real life, yet the director's whimsical approach creates an effective wry comedy. It feels like a fable; the simpleton learns his lesson and achieves moral victory. You know who to root for and who to be wary of from the beginning and the lead's obsession with getting rich quick makes you reflect on life in Korea today.

It works, avoiding cliches, thanks to its splendid cast. Song has one of the more ordinary faces in Korean cinema, and he knows how to use it with an uncanny ability to fit any part so effortlessly. His sad puppy-eyed Dong-sik, reminiscent of the timid, innocent title character from Jean-Pierre Jeunet's "Amelie" (2001), arouses so much pathos and sympathy, as he suffers series of humiliating events.

Seong's flattery master character is there more for comic value, but he shines in his part as usual.

The supporting cast, filled with seasoned actors like Kim Sung-ryung (playing the rival flattery master Ye-ji) and Ko Chang-seok (as boxer-turned-loan shark king Seong-cheol), is more than adequate. Perhaps the only exception wasLee Byeong-joon, who was a little over the top as the CEO.

"The Suck Up Project: Mr. XXX-Kisser" opens Thursday in theaters nationwide. Runs for 118 minutes. Rated 15 and over. Distributed by Lotte Entertainment.

There was much brouhaha over actress Go Hyun-jung's commercial film debut, taking place 20 years into her career. But her pick, "Miss Conspirator" by comedy special by Park Cheol-kwan, is a disaster.

With Sung Dong-il and Ko Chang-seok, stars of "The Suck Up Project: Mr. XXX-Kisser", in the supporting cast as well as Yoo Hae-jin in the lead, it is a wonder how much talent the director has wasted here. Not everyone will agree, but the fact that TVstar Park Shin-yang's obviously inaccurate Gyeongsang Province accent was left in the film saliently shows something went wrong during production.

The flow is so awkward in this crime thriller that if it were not for the painfully predictable ending, it would have been difficult to understand the plot, where Ko plays (rather poorly) a woman who has many phobias to an instrument to a drug deal.

There is a reason why almost half of the media walked out of the screening instead of staying for the press conference. That is very rare.

"Miss Conspirator" opens Thursday in theaters nationwide. Runs for 115 minutes. Rated 15 and over. Distributed by Next Entertainment World (NEW).

"'The Suck Up Project: Mr. XXX-Kisser' pokes fun at corporate Korea"
by HanCinema is licensed under a Creative Commons Attribution-Share Alike 3.0 Unported License.
Based on a work from this source