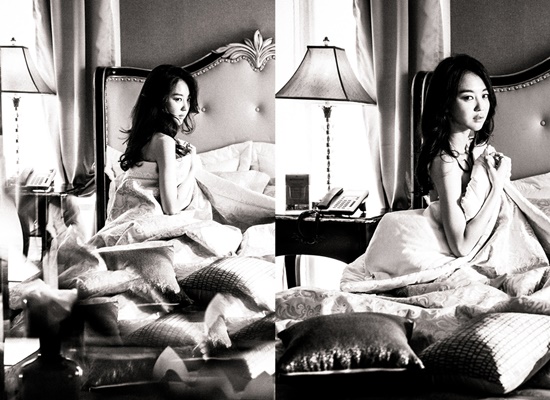 While the first episode of the drama has been scheduled to air on October 7th, Jang Hee-jin's mysterious looking still cut images are drawing attention.

In the revealed photos, Jang Hee-jin, who plays the mysterious woman with many hidden stories, is covered with a blanket on a bed and is staring into the camera lens.

Jang Hee-jin plays Kim Hyejin, a visual art instructor who is voluptuous and exudes the mysterious as well as sad vibes.

She was Seo Chang-kwon (Jung Sung-mo)'s secret lover, who is Achiara's the most powerful figure. She all of sudden disappears from the village. "Although I don't appear in many scenes in the drama, the impact of each scene of mine is very strong" said she. As she explained, the existence of the character itself is mysterious and secretive.

Jang Hee-jin said, "As soon as I read the script, my original plan to take a break from work disappeared". She liked the fact that her new role had a strong presence in the drama. She did not hesitate to join the new drama also because the new role is opposite to the character from her previous drama, 'Scholar Who Walks the Night'.

She said her roles so far had been the one who loved someone in an unrequisited one-sided love relationship. Jang Hee-jin said, "Hye-jin exchanges emotions with her partner this time. She is someone with the appeals I haven't been able to show so far" and "I'd like to cast off the usual image through Hye-jin's character".

"'The Village: Achiara's Secret' Jang Hee-jin on bed portrays a mysterious image, dreamy + fascinating"
by HanCinema is licensed under a Creative Commons Attribution-Share Alike 3.0 Unported License.
Based on a work from this source