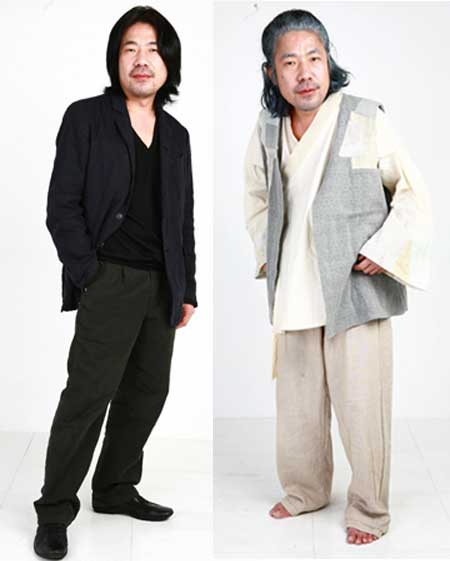 Actor Oh Dal-soo is set to return to his theater roots in the original "Sunset, Moon Dance" this month in Daehangno, central Seoul. / Courtesy of Eda Entertainment

Oh Dal-soo to portray fatherhood in return to roots

When actor Oh Dal-soo played a private jail owner who detains the male protagonist in Park Chan-wook's "Old Boy", he left his impression on one of the film's most memorable scenes.

With his strong presence in "Old Boy", he has received numerous offers from the local film industry as a scene stealer who makes works shine.

But few know Oh started his acting career in theater in Busan, not in film. Now he is returning to the stage with "Sunset, Moon Dance".

Clad in a black jacket and pants with shoulder-length hair, Oh says the theater is like home, where he was born as an actor and makes him feel alive.

"I don't want to divide my career into film and theater. It is meaningless for me. I want to be called an actor, rather than a movie star or a thespian", Oh said in an interview with The Korea Times.

The 43-year-old made his debut in the famous play "Ogu", directed by Lee Yun-taek, in Busan in 1990 and landed a role in "Namja Chungdong (Legend of the Man)", a hit drama directed by Cho Kwang-hwa in 1997 in Seoul, which totally changed his life.

"I went to Seoul when I took the role in 'Namja Chungdong'. The play led me to Seoul and opened my eyes to the bigger world of acting", he said.

"Sunset, Moon Dance", a homegrown work written by rising playwright Dong I-hyang and director Sung Ki-woong, will be presented by Singiru Manhwagyeong (Mirage and Kaleidoscope), where Oh serves as head of the group, and Eda Entertainment.

In the upcoming play he will portray "Mr. Hwang", an aging father obsessed with keeping his child safe within the perils of a goblin forest. The child tries to leave for the outside world, but instead encounters the tricky goblins and must forge a new way.

The drama uses traditional Korean language, song and dance to incite emotional, nostalgic responses via the visual and auditory senses.

"Mr. Hwang is a lonely man who is obsessed with his child, and must watch as the adolescent leaves for the new world", he said.

In a strong Busan dialect, Oh said that the goblins in the play represent a metaphor for the world the child will face.

"It is an implication to the child of what kind of world is waiting".

The coming-of-age play is told humorously, and fantasy-tinged scenes blur dreams and reality, time and space.

"I think the play begins from a father's point of view to understand the relationship of father and child, and solve their tension of mixed feelings of love and hatred. To resolve this complicated process, I needed to draw up the portrait of the father", he said.

"Finding the right type of father figure for this play was my first task".

Oh doesn't want the audience to understand and enjoy the play in the same way he does, because he thinks the work is always the audience's.

"I always want to leave room for the audience because we don't know what's happening on stage. The stage performance is so spontaneous and unexpected. That's one of the charms of theatrical performances.

"It's amazing, too, that both actors and spectators are in the same place and breathe the same atmosphere. So I love the theater", he said.

Oh has been acting for some 20 years but says it is always tough.

When he chooses productions, whether it's for film or theater, the scripts or scenarios are the most important factor.

"I have never regretted a role I took. I have never coveted a big role. Even if it's minor, I don't care. There shouldn't be a minor or major for an actor", he said.

But Oh jokingly said that someday, he wants to perform a warmhearted character who can touch the hearts of the audience, which is contrary to his former roles as cold-blooded villains or crime-related characters.

Oh has starred in films such as "Old Boy", "Mapado", "A Bittersweet Life", "The Host", "The Good, the Bad, the Weird", "Foxy Festival" and the period piece "Detective K" now showing in theaters nationwide.

"'Theater makes me feel alive' "
by HanCinema is licensed under a Creative Commons Attribution-Share Alike 3.0 Unported License.
Based on a work from this source