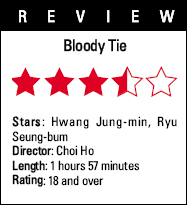 Many conventional crime thrillers feature a conflict between good and bad guys. And this dichotomized distinction often ends up with a fairly predictable conclusion _ the good side finally beats off the bad in the name of justice.

But director Choi Ho put some twists in the formula to look at the darker and more cruel aspects of human nature through crime and the relationship between people involved in his new crime thriller "Bloody Tie (Sasaeng Kyoldan)".

The film depicts a confrontation between evil characters, each with different pursuits in life that are easily justified as a means to their survival.

As the story evolves, the question the film ultimately poses is not who is right but rather who is the worst. Charismatic actors Hwang Jung-min and Ryoo Seung-bum, who play a ruthless detective and a drug trader, make the question even trickier.

The film begins with news reports and footage on drug trafficking in the southern port city of Pusan. When the serious financial crisis hit the nation in 1997, trafficking in drugs was at its peak and a war on drug smugglers began.

Do Jin-gwang (played by Hwang Jung-min) is a cruel veteran detective whose one and only goal is to arrest the boss of a drug trafficking gang. Lee Sang-ho is a tough drug dealer who got into the business when he was young because of his uncle, whose drug business killed his mother. Typically, Lee is out for cash.

These two seemingly perfect enemies, however, decide to help each other to achieve their own goals.

What Do needs most is inside information about the gang. Lee is the perfect informant as he is willing to betray his gang members for his own sake.

Do promises Lee that he will not pose any threat to his drug dealing business in return for his cooperation.

Given Choi's two previous melodramas, "Bye June" (1998) and "Who Are You - Movie" (2002), the film can be seen as a drastic shift for the director. But his adventure in this new genre seems to have been well researched.

Details on drug trafficking and the characteristics of drug gangs are realistically presented. As a result, some moviegoers may find the film too violent, brutal and obscene. (It is reportedly said that the director collected detailed information about drug trafficking for the film over almost four years.)

But the acting skills of the two main characters, which helps add a more realistic touch to the film, is good enough reason alone to make moviegoers want to see the film.

"'Tie' Bloody Well Worth Watching"
by HanCinema is licensed under a Creative Commons Attribution-Share Alike 3.0 Unported License.
Based on a work from this source