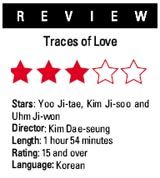 A luxurious Seoul department store abruptly collapsed into rubble in June 1995, claiming more than 500 innocent lives. It was recorded in history as one of the most disastrous and shocking accidents ever, yet the tragic stories of individual victims were buried all together.

Ten years have passed since, and director Kim Dae-seung attempts to dig into the forgotten accident in his new melodrama "Trace of Love".

But different from typical Hollywood disaster movies like James Cameron's 1997 film "Titanic", Kim sheds light on the efforts made by victims to deal with the painful memory and heal the painful aftermath.

Starring Yoo Ji-tae, Kim Ji-soo and Uhm Ji-won, the movie portrays a man who suffers from the loss of his girlfriend in the accident and sets out on a journey following the same path and the same footsteps his late girlfriend took when she traveled through the country.

In the film, Hyun-woo (played by Yoo) passes a law exam and proposes to his lover Min-joo (by Kim), and they are about to enter the world where their love seems as if it will last forever.

But it meets a tragic and sudden end when she dies in the department store collapse.

Since that day, 10 years have passed and he is now a successful prosecutor and changed into a seemingly very coldhearted man but he still suffers from the loss, remembering that on that day, she insisted that he come to the mall with her, but he asked her to go there alone and wait for him.

One day, he is suspended from his office because of bad management of a case. Knowing his poor situation, Min-joo's father visits him and hands him his daughter'S Diary, on which she wrote about various beautiful spots where she visited while working as a television tour program director. She planed to revisit every beautiful place in the book with him on their honeymoon.

On his journey, he is overwhelmed by the great scenery and feels as if she was with him. He also encounters a mysterious woman (by Eom) with characteristics similar to those of his late girlfriend, and traveling together, they start to learn how to deal with their pain.

The movie is full of beautiful scenery, including the country's rivers, fields, temples and mountains in the fall, which make you want to follow the trace of the main characters' journey.

But the overuse of such great scenery is rather disturbing in the end.

The director may want to say that Mother Nature symbolizes the opposite of radical civilization and has magical powers to heal the pain of her children. However, the film employs too many symbolic and poetic spins due to the poor fostering of a simple story and characters' inner emotional conflicts given the vivid images on the 1995's accident broadcast on TV.