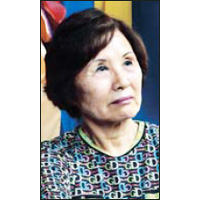 This is the first in a series of interviews that feature individuals who help promote Korean culture overseas. - ED.

NEW YORK - Koga Hyon-cha knows the famous hilltop church from the hit TV drama series "All In" like the back of her hand. In fact, she knows all the filming sites of popular dramas from "Winter Sonata" to "Full House" inside out.

Not surprising - after all, she only visited them more than a dozen times.

"No doubt I'm a regular, but I still get something new out of each trip", says Koga, 68, who has been organizing cultural tours from Hawaii to Korea for over a decade.

Dubbed "Passion for Korea", the tours kicked off in 2001 with one purpose: to introduce Korean traditional and popular culture to curious foreigners.

"It was just around the time when Korean dramas started getting popular among the locals", recalled Koga in an interview with The Korea Times.

Having taught Korean culture and language at elementary schools and adult education programs in Honolulu for nearly 30 years, she knew what people wanted.

"People wanted to know more about Korea, but there was very little information available for them", she said, "so I thought, why not take a trip?"

And that's how her journey began.

She designed and planned a two-week trip that sweeps through more than a dozen cities across the Korean Peninsula. From Jeju Island, Andong, Jeonju and Damyang to Seoul, the tour is anything but laid back.

"It's a tight schedule but there is just so much I want to show", says Koga, a passionate promoter of her home country.

After marrying an American, Koga left for Hawaii in 1967. Since then, she has been involved in numerous campaigns to promote Korean culture, history and language, including the annual Korean Festival in Hawaii.

Often called Hawaii's unofficial ambassador to Korea, Koga says the popularity of Korean drama and music is pumping demand for everything Korean. But there's still not enough to offer.

"We need more creative ideas to take advantage of this opportunity", said Koga, as she expressed regrets over the inconvenience foreign tourists still face when visiting Korea.

Things have improved over the last 10 years, but there's a long way to go to provide better accessibility for foreigners who don't speak Korean, she said.

Her group of roughly 30 tourists mostly consists of Japanese-Americans, who are a big presence in Hawaii. You won't be able to spot any Korean in this crowd.

"That's my rule. This tour's sole purpose is to introduce Korea to foreigners so I kindly reject Koreans who want to join", says Koga, whose trips are fully booked all the way through 2013.

She says Korean drama has become so popular in Hawaii that it is now "a part of people's everyday lives".

"All of the dramas eventually come to an end, but it's our responsibility to continue planting a positive image of Korea and Koreans", said Koga.

"'Why not take a trip?'"
by HanCinema is licensed under a Creative Commons Attribution-Share Alike 3.0 Unported License.
Based on a work from this source