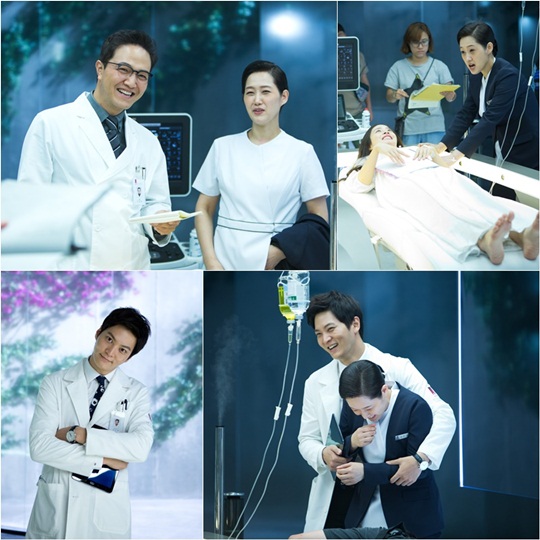 On August 24th, SBS' drama "Yong Pal" has unveiled behind-the-scenes photos showing off their cheerful ambience of the filming set.

The revealed photos feature a confrontation scene on the 12th floor VIP section among Yeo-jin (Kim Tae-hee), Tae-hyeon (Joo Won), who tries to protect her, Section Chief Lee (Jung Woong-in) against him and Nurse Hwang (Bae Hae-sun), who keeps an eye on him.

The strong screen presences by Section Chief Lee and Nurse Hwang heighten tension in the air. However, Jung Woong-in and Bae Hae-sun being playful and loose outside the scenes fill up the filming set with laughter

Joo Won, who has to stand in front of cameral without much break, also makes the ambience on the filming set relaxing with his cute and warm-hearted attitudes.

A staff from the filming set said, "Despite the hot weather and the continuous filming of large-scale scenes, the actors and staffs are encourage by the anticipation and love for this drama. We're all aware of it and work harder with thankful mind".

Since the first episode aired on August 5th, "Yong Pal" has been renewing the record of viewership rating every time.