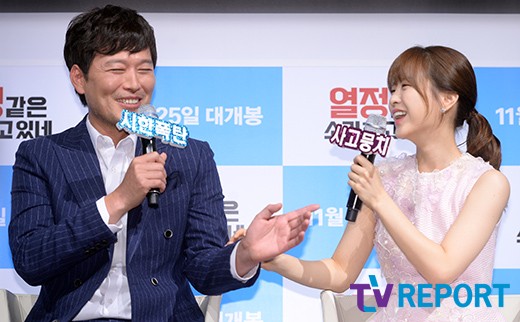 The press conference for movie, 'You Call It Passion' was held on October 21st at CGV Apgujeong, Sinsa-dong, Gangnam-gu, Seoul.

Park Bo-young plays Do Ra-hee, who has just become an intern reporter after barely passing the hiring process despite her brilliant resume.

Jung Jae-young plays Ha Jea-gwan, a manager of entertainment news department, who has a strong belief and refuses to fail anything.

During the press conference on this day, Jung Jae-young answered yes to the question, "Were there times you could not bring out anger in acting because of Park Bo-young's eye smiles".

Jung Jae-young said, "Park Bo-young's too pretty and cute, it's a hindrance" and "Despite all that, I performed method acting". His answer evoked laughter.

Movie "You Call It Passion" is a comedy about rookie sports reporter Do Ra-hee meeting a superior called Ha Jae-gwan and suffering from his pressure. The movie is directed by Jeong Gi-hoon and Park Bo-young stars as Do Ra-hee while Jung Jae-young is in the role of Ha Jae-gwan. The movie will be released on November 25th.

"'You Call It Passion' Jung Jae-young says Park Bo-young's eye smiles hinder his expressing anger in acting"
by HanCinema is licensed under a Creative Commons Attribution-Share Alike 3.0 Unported License.
Based on a work from this source