'You Pet' to Be Released Upcoming January in Japan 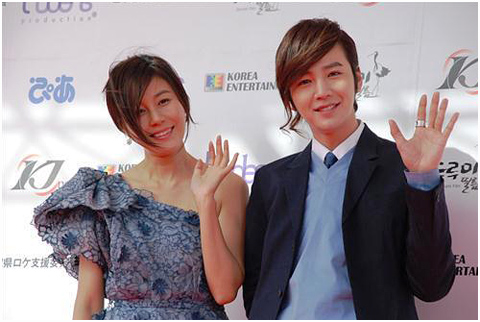 The controversial movie "You Pet" (directed by Kim Byeong-gon), in which Hallyu star actors Jang Keun-suk and Kim Ha-neul appear as protagonists, will be released in Japan this upcoming January, the Sankei Sports reported on August 29. "You Pet" is a romantic comedy movie about a love story between a career woman named Ji Eun (Kim Ha-neul), who is not good at having a relationship, and a handsome young man (Jang Keun-suk), who wants to become a dancer. They come to live together by forming a strange relationship, one of "pet" and "owner", and they will have a romance while living together. The production presentation of "You Pet" was held at Ibaraki Airport in Japan on March 3, and the production team had been scheduled to begin filming the movie in Japan from May, but the filming schedule in Japan had been canceled due to the huge earthquake in Japan. At that time, Jang Keun-suk donated 10 million yen and five thousand blankets with encouraging messages to the earthquake victims.

Jang Keun-suk and Kim Ha-neul filmed the last scene of the movie in Seoul on August 28, and they expressed their feelings, saying, "We are very sorry that we could not film this movie in Japan as we had planned. We enthusiastically participated in filming this movie to deliver our encouraging messages to you through this movie". Jang Keun-suk elaborated about the film by saying, "I wanted to present various charms, both masculine and cute, at the same time". Kim Ha-neul said with confidence about the movie, "We have produced a perfect film about a pet that everyone seems to want".

"You Pet" will be released in November in Korea, and Jang Keun-suk and Kim Ha-neul will visit Japan next year when the movie is released in Japan.

"'You Pet' to Be Released Upcoming January in Japan"
by HanCinema is licensed under a Creative Commons Attribution-Share Alike 3.0 Unported License.
Based on a work from this source