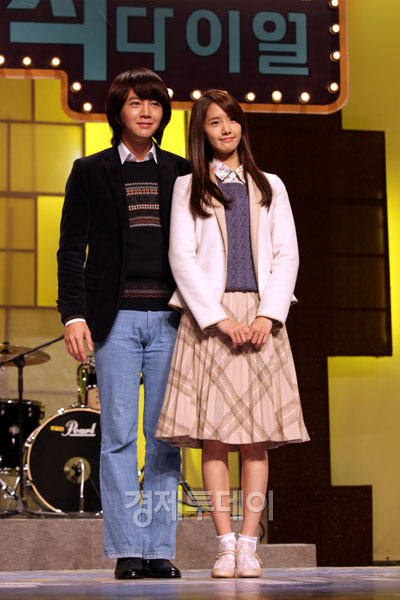 A drama that contains the analog emotions of the 1970s and the romance of the 2000s is coming soon. Produced by Yoon Seok-ho from "Autumn in my Heart" and "Winter Sonata", with writer Oh Soo-yeon, "Love Rain" is what everyone is talking about.

The scene that was shot at the Daegu Childrens Meeting Hall is an important one wherein the three main characters (Jang Keun-suk, Kim Shi-hoo and Seo In-guk) from the 70s, who shared youth, romance and friendship meet the end of their friendship, dreams and first loves at the open audition for their own song "Love Rides The Rain".

Seo In-ha (Jang Keun-suk) sings on stage and Kim Yoon-hee (Yoona) watches him from far away crying as he recognizes her and says "Thank You".

Jang Keun-suk, who acts the art student Seo In-ha, a character with undying love and a caring personality, and Seo In-ha's son Seo Joon, a freewheeling photographer, said "Seo In-ha from the 70s has sensitive emotions as he is an art student but he doesn't let his feelings show on the outside".

"It was most difficult trying to portray the 70s, which I've never experienced before. According to the circumstances of the generation people's speech and habits can differ so I let go of my way of speech for a while and got a lot of advice from the director".

It has been speculated that Jang Keun-suk would again play a singer, for almost every role he's had has been as a singer and this time as well, he sings as Seo In-ha, with a classic guitar. He said, "It's funny how there's always a song. However, I don't choose my work because of the song. I think I should exist as the character I act on the set and not Jang Keun-suk. I should think that Seo In-ha is the one who likes music and not me".

About this Yoon Seok-ho said, "The symbol of the 70s is classic guitars and jeans. I needed the guitar scene to draw out the 70s. I didn't think about Jang Keun-suk from the beginning but I thought it would be nice to have someone who could sing well to sing in my drama".

Yoona, who takes on the role of Kim Ha-na, the daughter of Kim Yoon-hee from the 70s, is a nice-looking girl with a bright and cheerful personality. She said, "I am honored to be able to work with producer Yoon Seok-ho and writer Oh Soo-yeon. I am enjoying every day and working very hard".

Being in a drama for the first time in two years since "Cinderella Man", Yoona said, "I couldn't wait to get back to acting for the past two years. I was also very greedy when I saw "Love Rain". The 2012 Kim Ha-na was very much like me but I didn't know how to act as Yoon-hee from the 70s. However, the producer led me step by step so I managed easily".

She added, "We are now at the end of the 70s generation. I am looking forward to the Yoon-hee character on TV as I think I did a good job".

"Love Rain", which portrays a relatable love despite the fact that it spans generations, is going to rain love in reality. It is due to be released in the early half of next year.

"100% romance "Love Rain" by Yoon Seok-ho"
by HanCinema is licensed under a Creative Commons Attribution-Share Alike 3.0 Unported License.
Based on a work from this source