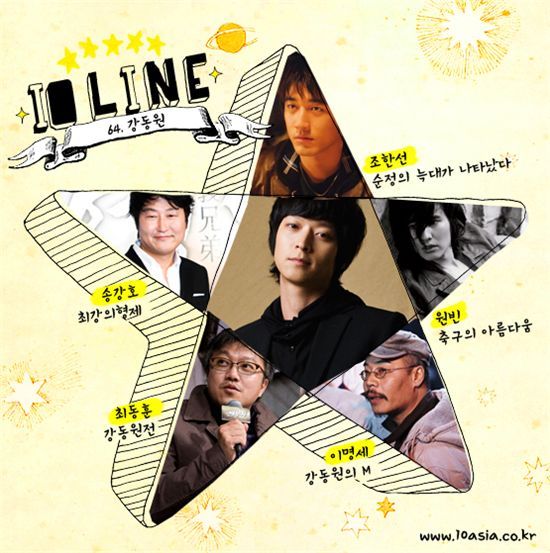 Gang Dong-won
"Just talking about you is cool and you're handsome and all I can say is that I love you a lot. That's the truth". -from the movie "M". Being handsome is important but you need something more than just the looks. Just like actor Gang Dong-won.

Ha Jung-hwa
He was Gang Dong-won's physical education teacher from middle school. Kang wrote a letter thanking Ha in the magazine "Good Friend". When he was younger he was smart and athletic and he reached the height of 180cm after growing 25 cm during his middle school years. However, his parents did not approve of him playing soccer and he began to rebel during puberty. That is when Ha constantly persuaded and set him straight, and soon after Kang went back to studying hard, receiving a 192 out of 200 points in the unified high school entrance examination. Once he entered high school however, he lost interest in studying and instead chose his friends, drinking and getting high scores in billiards. Sometimes he would hand in blank sheets of paper for his tests and ranked 198 out of 200 in the whole school. Nevertheless, Kang did not want to disappoint his parents and began to study very hard during his senior year of high school and successfully made it into a college. In other words, Kang was the kind of student who could but didn't.

Jo Sung-mo
Singer. Kang starred in Jo's music video for the song "I Swear". Before Kang entered college, he lived alone in Seoul. Whenever he would walk down the streets in Seoul, he would be offered street castings due to his eye-catching appearance. In the end, Kang signed with a trustworthy looking company and began his modeling career. Kang had longer legs than the other models in his height group and in the modeling world, "Modeling may look fancy on the outside but one can fall out of the competition if the model doesn't take the time to take care of themselves or put in any effort" and with that in his mind he debuted into the overseas market walking in Pret-a-Porter, Paris. But after thinking about his future, Kang decided to pursue acting after starring in Jo's music video. At the time, Kang had a hard time acting out the kissing scene with his co-star that he just met. Also, Kang did not like that fact that as an actor he would be treated with favoritism at the fashion shows and has not appeared in a fashion show since.

Kim Jung-hwa
Co-star of MBC series "Something About 1%". Kang played the cold yet upright son of a chaebol, quickly developing a fandom by playing a character who is completely different from him. His seemingly unrealistic good looks combined with his character who is completely realistic made his character created a fantasy as if he could be someone who actually existed. He was also able to portray a doctor who spoke in a regional dialect for the MBC drama "The Funny Wild Girl".

Kim Ha-neul
His female co-star in the movie "Too Beautiful To Lie". Just like his role in the drama "The Funny Wild Girl", he played a simple and naive country pharmacist in "Too Beautiful To Lie". Director Bae Hyeong-joon said, "I was bit worried at first because how can this 'handsome guy who looks like he is from Japan' be able to pull off the role of a countryman but Kang was able to bring a sense of innocence for the role of Hee-chul". In order to create a more realistic expression, he mixed wasabi on the spicy peppers from Cheongyan for a scene in the movie. Kim said "he is an expert in portraying difficult facial expressions" because he has shown various looks. If his slightly slow and articulate way of speech he showed in all his roles, excluding "M", is the characteristic to his acting, being able to show a variety of expression which suit his character was the reason he was able to break away from the stereotype that he is a 'model-turned-pretty-faced actor'. He is the actor that is able to make the women crazy with his dialect or his laugh.

Shin Yong-wook
The acting coach who taught Kang about theatre before he made his debut. There was a time when Kang once said he wished he had the same passion as Shin had. Between his roles in “Too Beautiful To Lie" and “Temptation of Wolves", Kang said, “I usually don’t have the perseverance to finish something besides soccer but acting is becoming a lot more fun.” That was the starting point of when he began to enjoy acting. When he was acting with his senior actors who were playing supporting roles in “Too Beautiful To Lie” he learned, “How well you act outside the spotlight is more important than how you act when in the spotlight". And by permission from the director, he intentionally played his character in a dull manner. At the time, Kang was not expecting to surpass his acting abilities but was concerned about “how much can I improve from now on.” He did think a lot about his acting, knowing that he must “broaden on my scope of emotions and experience much more", leading to him to take on a larger variety of roles. After “Magic,” the roles that he chose for himself were in different genres and styles. “For me I don’t do things roughly or compromise” and this is when Kang’s greed in acting began.

Won Bin
One of Kang’s closest senior actors. They are both in the celebrity soccer league ‘Winners’ and they enjoy playing the soccer video game “Winning 11.” With the money that he received from shooting "The Funny Wild Girl" he purchased a motorcycle and when asked what his favorite 10 things were he answered soccer, "Winning 11", RC car and others showed off his masculine tastes. He enjoys reading the cartoon "Gantz" because of the "unbelievable violence and elaborate developments which is just incredible" and he claims that is the type of guy he wants to be acknowledged as -- "a guy that other guys will acknowledge as a guy". With his personality and romance comic-like look, he brings eccentricity to the characters that he plays. In the movie "Duelist" he plays an assassin and in "Maundy Thursday" ("Our Happy Time") he brings innocence to a role where he is condemned for committing homicide. In "Duelist", even though he is the male lead he seems to be more feminine than his co-star actress Ha Ji-won through his "sad eyes" which excellently combined Kang's character and the image that he was going for.

Ha Ji-won
His co-star in the movie "Duelist". "Duelist" is the first action movie that Kang has starred in and "it's weird that I had a hard time on other sets but it was really fun on the set of "Duelist". The audience has seen it in his previous films before "Duelist" but now they clearly see the extreme limits and 'how-to of Gang Dong-won'. In "Duelist", he was able to accurately relay his lines without speaking but through his 'sad eyes' to the viewers. The way he looks at his first love Ha Ji-won, shows that he is an actor that can deliver anything through his acting and make the audience think at the same time. Photographer Park Ji-hyuk said, "Kang is the perfect subject because of his model background and the deep experiences that he gets from acting". However, Kang didn't harvest from the success from "Duelist" but through the movie he began to create his territory.

Lee Myung-se
The director of "Duelist" and "M". If Kang showed his outer side in "Duelist", he portrayed his inner side through "M". In each scene, he is able to go back and forth in his acting and set the tone of “artificialness and exaggeration” through the everyday life of a writer. In "M" his keen and sharp expressions were shown to the audience. In real life Kang said, "Instead of forgetting one thing while keeping in mind of other things I rather be an antagonist" because he had a distinct color. When he is working he is highly temperamental and sensitive. A Confucian analects says, 'People who have a lot of knowledge is liked by others, but those with the knowledge cannot enjoy it as much as them'. Kang is the kind of person who only wants to do things he enjoys but once he does something he is a perfectionist. His perfectionist personality was shown through the movie "M" and he exaggerated the role with his actions and tone. Kang's character in "M" portrays his own character as well.

Song Kang-ho
Actor who starred in "Secret Reunion" with Kang. He played a "secretive and stuffy" North Korean spy. However, his character was neither dangerous nor full of secrets but closer to a wounded young man who lost his way. That is why the audience wanted his character to have a happy ending; he was the warm breath of air with his harmony with Song even in the cold basis. Gong Ji-young, the writer of “Maundy Thursday” ("Our Happy Time"), explained his face is “so good looking that most people will want to abolish the death penalty” but Kang shows an image that only he is able to express. That is how Kang is able to leave his color in the projects that he has done. It is just like what Kang says "doing something you enjoy" and if you accomplish that the mass public will accept that which becomes power. In the beginning of his acting career he said, "How far will my looks get me in this industry? It doesn't matter if you're a soccer player or actor, but if you last longer than others then you are good at what you do". So far, Kang has been doing a good job.

"[10LINE] Actor Gang Dong-won"
by HanCinema is licensed under a Creative Commons Attribution-Share Alike 3.0 Unported License.
Based on a work from this source