13 questions for actress Jung So-min  "Daddy You, Daughter Me" 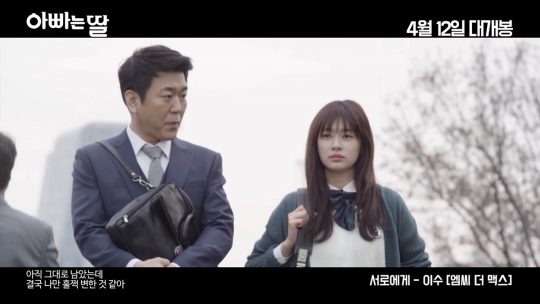 1. Introduce us about "Daddy You, Daughter Me"

This is a family oriented movie about a father and his daughter who have their body swapped. The two will have their arguments but also learn about each other and start to understand one another while their body is swapped. All the little episodes within the movie will attract the viewers for laughter and have their heart tingle with warmth.

I have two characters, so to say. First is 17 years old high schooler, Do-yeon. After the body swap happens, I am 47 years old Sang-tae.

3. Different gender, and being an ahjussi

It was definitely one of my biggest homework. Acting body swapped person is hard as it is, but to act out and understand the heart of a father was difficult.

The ramen scene was one of the most memorable scene for me since I love ramen and the clothes I'm wearing in the scene is actually my father's. Like, my father in real life. haha

A character who does heavy action is one of my dream role.

My biggest support and motivation is my family, including my puppy.

7. If I have a choice to body swap with someone, who would it be?

Foreigner, haha. I've lived as a Korean all my life, so I want to try living as someone from different culture.

On the original script, there weren't any swearing or cuss words in the lines. It was added after we discussed it with the director. Right before I filmed the movie, I was filming "D-Day" with senior actor Kim Sang-ho. He is so talented at saying cuss words so nostalgic and even endearing. So I called him up and said "Sunbae, I'll copy you". He was really happy, haha.

My tip is the fact that I don't have a tip, haha. I just trusted the situation in the script and analyzed my character.

12. Moment I wanted to give up

I actually had a moment where I thought this was not my path. However, when I shared my concern with those around me, they treated pretty lightly. So I thought to myself, "Well, I guess it's not that concerning to begin with".

I think a lot. Last night, I was simulating this interview. Also, I do my stretches before sleep to ease up the tension on my body.

"13 questions for actress Jung So-min  "Daddy You, Daughter Me""
by HanCinema is licensed under a Creative Commons Attribution-Share Alike 3.0 Unported License.