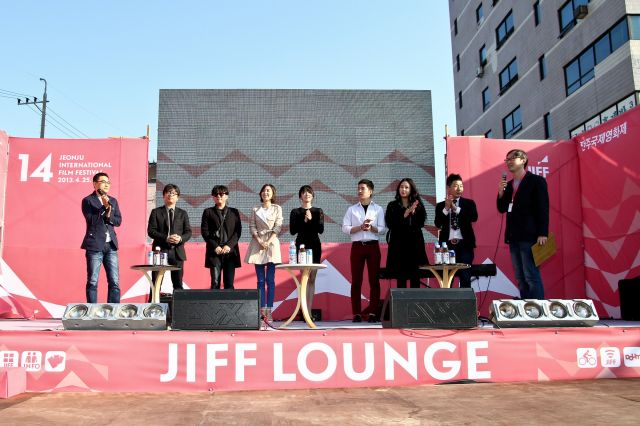 - Increased seat occupancy of weekends and sold-out rate (comparing to the last year)
- Reached high scores of seat occupancy, especially in 'COMPETITION', 'FOCUS ON' and 'STRANGER THAN CINEMA'.
- Rapturous reaction on 'JIFF TALK' and 'JIFF CLASS'.
- Successful outdoor performances and stage greetings in a rainy day!
14th Jeonju International Film Festival sets Jeonju on fire with film lovers from all around the country since a glorious Opening Ceremony began on the 25 Apr (Thu).  The tickets for FOCUS ON section   and COMPETITION section of thefestival are evenly sold out. Additionally, although it was rainy, lots of outdoor events and talk programs have been successful. Venues were absolutely packed with great energy of cinephiles.
JIFF2013 shows that seat occupancy rate on weekends have been more increased compared to the last year as well as the number of sold-out tickets. Especially, tickets for Opening Film, KOREAN SHORT FILM COMPETITION, andKOREA CINEMASCAPE were all sold out with involvements of Korean directors and actors. The festival reached more than 95% occupancy of audiences for SPECIAL : KAKFA MEETS FILM and INTERNATIONAL FILM COMPETITION. Moreover, STRANGER THAN CINEMA which represents outstanding uniqueness of festival's identity and leads to discovery of different cinematography has increased the share of audience by reaching more than 90%.
The most popular films on weekends are SEE YOU NEXT TUESDAY by director Drew TOBIA of INTERNATIONAL FILM COMPETITION, THE CASTLE by director Michael HANEKE of SPECIAL : KAFKA MEETS FILM in FOCUS ON and Dear Dolphin by director KANG Ji-na of KOREAN FILM COMPETITION.
Newly re-organized program of this year are also popular so far. MASTER CLASS, temporarily closed last year, is renewed and now gained great attentions back from public. Tickets were sold out completely for 'Ryoo Seung-wan'S CUT: DESIGN OF SPEED AND CLASH' and 'LANGUAGE OF CINEMATOGRAPHY' by director Darezhan OMIRBAYEV were also completed in success. Continuously, TALK CLASS which provides various perspectives on each film were also sold out including 'Chef PARK Chan il's delicious TALK CLASS' on Mussels In Love(CINEMAFEST), "IDEOLOGY?", SLAVOJ IEK SAID on The Pervert's Guide to Ideology and CINEMA MEETS KAFKA on The Castle.
JIFF LOUNGE TALK allows audiences to meet film makers and actors face-to-face. Directors and stars who attended the talk program as casts of SHORT! SHORT! SHORT! 2013 are below. Directors: Park Jin-seok, Jinsung Park, Lee Sang-woo-IV, and Lee Jin-woo. Actors: Bae Seul-ki, Shin Dong-mi, Jo Yoon-hee, KIM Young-taek and KIM Seo-hyung.
Actor Seo Young-joo of "Juvenile Offender" and Director Laurent CANTET as well as Actress Katie COSENI of FOXFIRE also joined. Kang Woo-seok, Director of "Fist of Legend" attended with the following actors Hwang Jung-min, Yu Jun-sang, Sung Ji-ru, Jung Woong-in and other casts. Actress Rie Young-zin, Han Ye-ri and Director Kang Jina of "Dear Dolphin" were willing to enjoy talking stage as well so that JIFF LOUNGE TALK was completed in huge success
CINEMA TALK invites a novelist KIM Young-ha with 4 directors of SHORT! SHORT! SHORT! 2013 to discuss about the agony and the ecstasy of true creativity and writing. On weekends, outdoor live music performances by Nemesis & Starfish, J Rabbit & leeSA, and Sachoom held on stages. Many events also filled up the festival with joy and pleasure. On Saturday, OUTDOOR SCREENING and talk programs were partly cancelled due to the weather condition. However, on outdoor stage greeting, figures of "Fist of Legend" met audiences even in rain. YMEA's party with audiences was successfully performed additionally.
The happiest journey of films in beautiful spring, JIFF2013 will be continued until the 3 May (Fri) with passionate audiences.