2009 Drama Awards Wrap Up With No Surprises 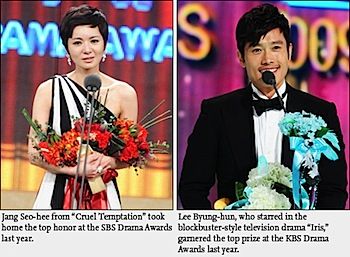 There were no big surprises at the Drama Awards held by the three major networks ― KBS, SBS and MBC ― last year.

The Grand Prizes each went to Lee Byung-hun for his work in "IRIS" (KBS), Jang Seo-hee for "Temptation of Wife" (SBS) and Go Hyun-jung for "Queen Seon-deok" (MBC).

Year-end drama awards have been criticized for being too generous when giving out awards and also not meeting the public's consensus. Last year's events were indeed generous, yet there were no decisions that caused anyone to shake their heads. However, there were distinctive trends that made the three events different from the past.

Unlike the pop industry where young idol bands are main stream, the older crowd is on top in the drama scene.

Lee, Jang and Ko are all in their '30s, beating their younger colleagues with their charisma, experience and impeccable acting skills.

Top prizes, including the Best Acting Awards, also went to actors and actresses in their thirties, including Chae Shi-ra ("The Iron Empress", KBS), Yoon Sang-hyun ("My Wife is a Superwoman", MBC) and So Ji-sub ("Cain and Abel", SBS).

Most of the dramas aired last year featured 30-something actors. Notable exceptions included hit drama "Boys over Flowers", but many television series dealt with more mature characters who were caught up in love triangles and hip trends.

Thanks to the superb acting, numerous dramas, such as "Style" and "Cain and Abel" managed to receive critical acclaim, even though they failed to mark high ratings.

Last year saw numerous actresses bloom, thanks to dramas that depicted love and battles between the two sexes.

Along with Ko, Lee Yo-won also received the Best Acting Award for her role as Great Queen Seondeok, while Kim Nam-joo took home the same prize as the smart yet silly housewife from "My Wife is a Superwoman".

Kim Tae-hee and Kim So-yeon also made a lasting impression for their tough and distinctive roles in the popular drama "IRIS", and their work paid off with awards at the KBS Drama Awards. Kim Tae-hee, who has been continuously criticized for her poor acting throughout her career, thanked viewers in tears as she received the awards, while Kim So-yeon also cried as she thanked her loved ones.

Dramas of 2009 also displayed numerous couples on the small screen, and of course awards were given to the best ones.

MBC's Best Couple Award went to Lee Yo-won and Kim Nam-gil from "Queen Seon-deok", while SBS awarded singer-turned-actor Lee Seung-gi and Han Hyo-joo from "Shining Inheritance". Lee and Kim's characters in the period drama failed to find happiness on the small screen, but their tragic love and affection toward each other moved the audience. KBS gave out awards to a number of couples: Lee Byung-hun and Kim Tae-hee ("IRIS"), Yoon Eun-hye and Yoon Sang-hyun ("My Fair Lady"), Ku Hye-sun and Lee Min-ho ("Boys over Flowers"), and Lee Pil-mo and Yoo Sun ("My Too Perfect Sons").

The year 2009 has come to an end, and so has the excitement of last year's soaps.
With high hopes and keen anticipation, the three major networks are expected to provide yet another exciting year, filled with talented actors, interesting storylines and catchy trends.

"2009 Drama Awards Wrap Up With No Surprises"
by HanCinema is licensed under a Creative Commons Attribution-Share Alike 3.0 Unported License.
Based on a work from this source