2015 Actresses and their salaries 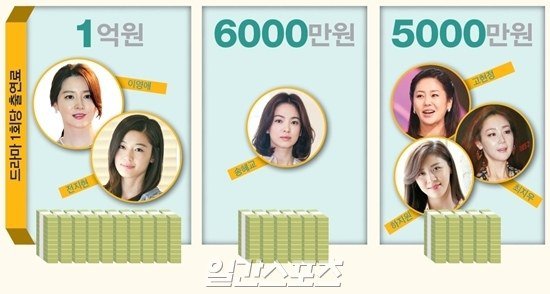 The most highly treated actresses are of course, Lee Young-ae and Jun Ji-hyun. They are a premium because they hardly star in dramas anyways. Lee Young-ae, who is looking forward to coming back with the drama "Saimdang: Light's Diary", is amazing just simply by her presence. Emperor's Group, a co-producer invested 10 billion won into the drama. This is thanks to Lee Young-ae's popularity in the Chinese region.

Jun Ji-hyun starred in the drama "My Love from the Star" for the first time in 14 years since the 1999 drama "Happy Together". Her pay per episode is 100 million won. Sponsors and advertisement agencies competed with one another to get to her. Not only did she cause a syndrome with "My Love from the Star" but she also made it big with the movie "The Assassination" and we wonder what's next. 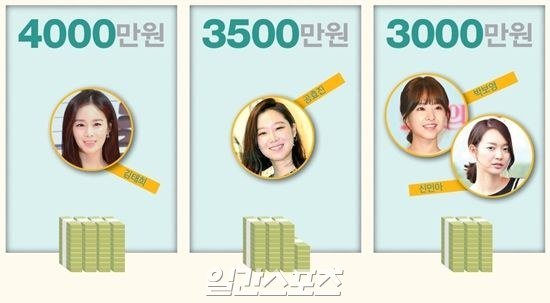 Song Hye-kyo comes next. She is on the same boat with writer Kim Eun-sook this time. She's been on the 50 million won per episode line ever since the drama "That Winter, the Wind Blows".

Choi Ji-woo also signed for 50 million won per episode with tvN. She is the highest paid actress since the opening of the broadcasting station. She's also become a premium because it's the first non-ground-wave drama she's in for the first time in 21 years.

Kim Tae-hee gets 40 million won per episode just for laying down. It's a decrease considering her failure in "Jang Ok-jeong" but she's top class Gong Hyo-jin is also slightly under 40 million won. However, she didn't mind the cut starring in "Producers" although it was lesser than what she received in "It's Okay, That's Love".

Park Bo-young increased her value to 30 million won in just 7 years of her acting life. She was the best paid actress in tvN before Choi Ji-woo. Park Shin-hye gets lesser than expected. She is appealing with her hard working character since she was a child actress. Everyone thinks her next drama will be paying her much more than this as she made it so big with "Pinocchio". Idol stars and actresses Suzy and Yoona are getting paid somewhere around the 20 million line. 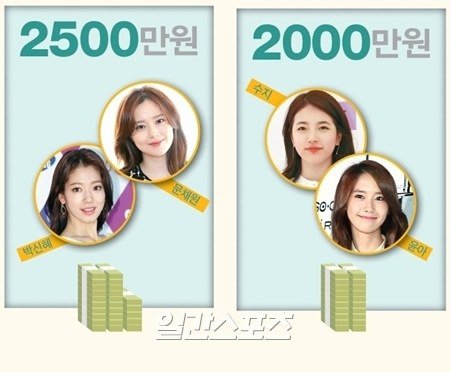 "2015 Actresses and their salaries"
by HanCinema is licensed under a Creative Commons Attribution-Share Alike 3.0 Unported License.
Based on a work from this source