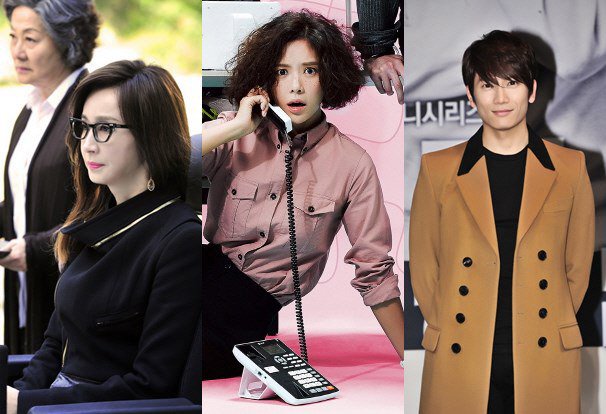 Three candidates are competing for the 2015 MBC Drama Awards.

The three of them have been flawless and contributed to great success in the Korean drama industry.

Jeon In-hwa is in the role of Sin Deuk-ye in the weekend drama "My Daughter, Geum Sa-Wol". She takes revenge on the people who bullied her and the drama is about to reach 30%. The fact that the drama continues onto next year makes it very likely that Jeon In-hwa will take home the prize because it helps with the promotion of the drama.

Jeon In-hwa also starred in the drama "The Legendary Witch" which also reached 30% in viewing percentage.

She's responsible for the success of the MBC drama "She Was Pretty". Before the drama, Hwang Jung-eum was compared to Jang Hyuk, Yoo Oh-sung and Kim Min-jung in "The Merchant: Gaekju 2015" and Moon Geun-young and Yook Sung-jae's "The Village: Achiara's Secret" for not being 'serious enough'. However, Hwang Jung-eum's performance as a pretty student who goes through adolescence and changes in appearance, paid off.

Hwang Jung-eum also starred in the drama "Kill Me, Heal Me" which was another popular hit.

Ji Sung was the lead in "Kill Me, Heal Me" with Hwang Jung-eum. He took on the role of a multi-personality character with 7 personalities. He was able to breeze through all seven characters whenever the script required it. Compared to Jeon In-hwa and Hwang Jung-eum, he didn't star in that many dramas but his hard work has been acknowledged.

"Kill Me, Heal Me" was able to start off the Wednesday-Thursday miniseries timeline with a bang.

"2015 MBC Drama Awards Grand Prize: Jeon In-hwa VS Hwang Jung-eum VS Ji Sung"
by HanCinema is licensed under a Creative Commons Attribution-Share Alike 3.0 Unported License.
Based on a work from this source