2019 Dramas, "SKY Castle" Opens and "When the Camellia Blooms" Closes 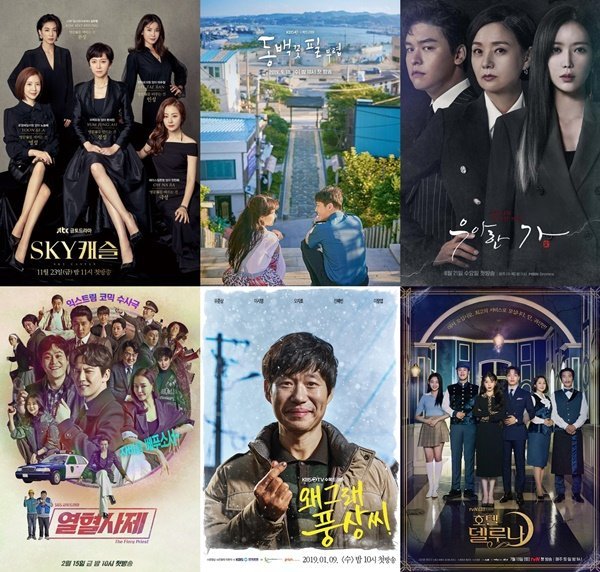 In 2019, the industry had a string of big-screen dramas with huge production costs. However, not all of the blockbuster dramas have been very powerful. "Arthdal Chronicles", which cost more than 50 billion won in production, didn't regenerate, despite broadcasting in three parts, and left a mark on its ego. "Vagabond", which drew attention for its 25 billion won investment plan and outstanding casting, couldn't quite cause a stir, and ended at barely a two-figure viewing percentage. The 'winners' were the ones that completely mesmerized viewers with not just bulk, but scenario, production and performance. 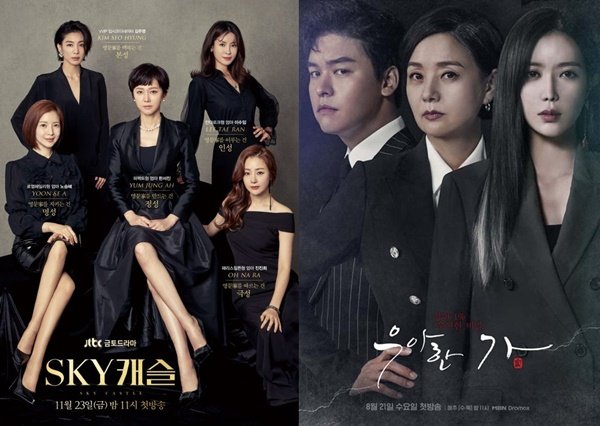 - From "SKY Castle" to "Graceful Family"

The doors to 2019 were opened wide not by ground-wave dramas, but cable and general service channel ones. TvN's "Goblin" holds the record for highest viewing percentage for a non ground-wave channel drama, and next comes the legendary "SKY Castle" by jTBC, which is of course the best drama out of 2019. "SKY Castle" is a real comic satirical drama that takes a closer look at the desperate desire of women from prestigious families who want to raise their children as princes and princesses in the SKY Castle, where the top 0.1% of Korea lives. "SKY Castle" captured both ratings and popularity, and it also swept the 55th Baeksang Arts Awards in 2019.

Kim Hye-ja of the jTBC drama "The Light in Your Eyes" then had the honor of winning the Grand Baeksang Arts Award. At the time of winning the award, Kim Hye-ja made a speech using the ending narration from the drama.

MBN's "Graceful Family" made an impact. "Graceful Family" is a drama about a team called Owner Risk, which will do anything and everything to maintain corporate wealth and secrets hidden in Korea's top 1% chaebol families. The first episode started off with 2.7%, but it quickly took off and by the ninth episode, it had reached 5%, then 7-8% and finally 8.5%. With the addition of Dramax, the drama added up to 10.1% in viewing percentage. The Owner Risk team leader Han Je-gook (Bae Jong-ok) is a character who will go down in history. 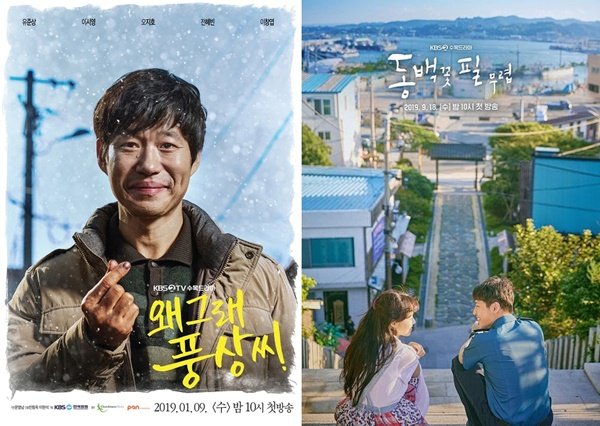 - "Liver or Die" to "When the Camellia Blooms"... KBS saves face for ground-wave

KBS saved face for ground-wave channels. Writer Moon Yeong-nam's "Liver or Die" starring Yu Jun-sang saved the earlier half of the year, while writer Lim Sang-choon's "When the Camellia Blooms" starring Gong Hyo-jin and Kang Ha-neul saved the latter half of the year by breaking through 20% in viewing percentage.

"Liver or Die" is a drama that redefines the meaning of family through the daily mischief caused by the siblings of a middle aged man named Poong-sang (Yu Jun-sang), who has more than enough patience for his little brothers and sisters. The drama presented fun and moving moments, which led it to end with a viewing percentage of 22.7%.

"When the Camellia Blooms" is a romance drama about a woman named Dong-baek (Gong Hyo-jin), who is caught up in prejudice, a man named Hwang Yong-sik (Kang Ha-neul), who believes love will solve everything, and the people around them, who don't believe love is the answer to everything. The drama is a mix of romance and thriller that presents sweet moments as well as bone-chills, and ended with a record of 23.8%.

"Doctor Prisoner" and "The Tale of Nokdu" also achieved more than better results. KBS weekend dramas are still doing very well, as Choi Soo-jong's "My Only One" reached a shocking record of 49.4%. 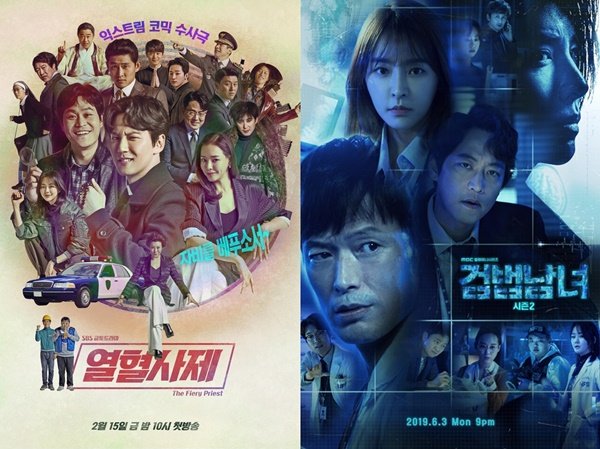 SBS came out with hit makers every once in a while. It did well with Friday and Saturday dramas in the beginning of the year. "The Fiery Priest" starring Kim Nam-gil, Kim Sung-kyun and Lee Honey tells the story of a righteous, hot-blooded Catholic priest digging into the truth of a murder and bringing justice. It isn't the typical 'good beats evil' kind of story. The Catholic priest's realization of justice by taking off his priest's uniform and pursuing the criminal himself, and the story of digging up the murder case with the special team prosecutor, broke the prejudice that it was a boring revenge play. The drama recorded 22.0%.

On the other hand, "Vagabond", a 25 billion won blockbuster drama starring Lee Seung-gi and Suzy, ended rather disappointingly. The drama is about a man involved in a plane crash discovering the greatest national corruption of all time.

MBC has the poorest results out of all ground-wave channels when it comes to series. It attempted to turn things around with 9 O'clock dramas. In addition, "Investigation Partners Season 2" contributed to opening the doors for season dramas. "Investigation Partners" is an investigative drama about a forensic scientist named Baek Beom (Jung Jae-young) and a hot-blooded rookie investigator named Eun Sol (Jung Yoo-mi), which ended in July last year. The second season of the drama aired at 8:55PM, an experimental attempt which resulted in 9.5% in viewing percentage.

Another drama with some level of success was Han Ji-min and Jung Hae-in's "One Spring Night" and Kim Hye-yoon, Rowoon and Lee Jae-wook's "Extraordinary You". 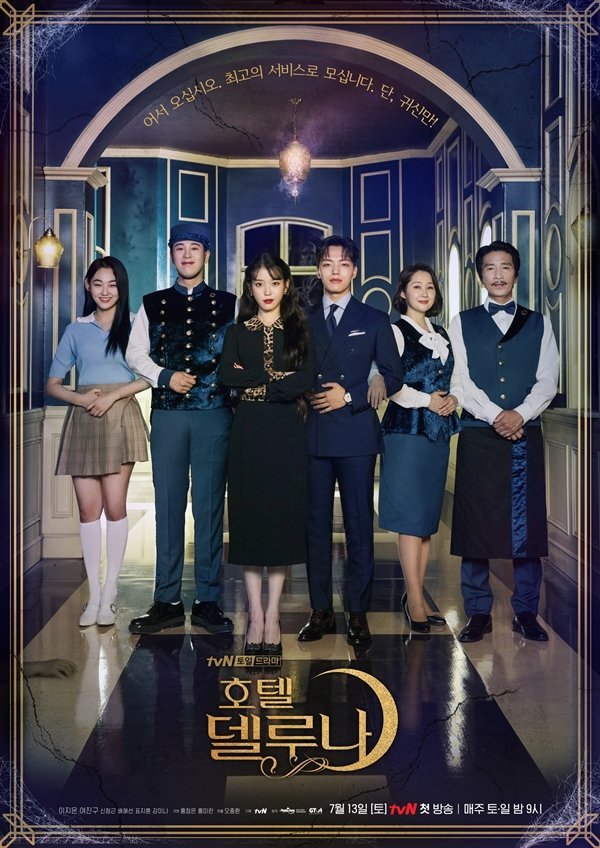 TvN, which led an era by emerging as a new drama kingdom, lost face in 2019. "The Crowned Clown" hit a record high of 10.9%, but later failed to produce an expected viewership.

The failure of "Arthdal Chronicles" was the biggest. The drama is the tale of the heroes of a place called Arthdal, a land from ancient times. It was especially interesting, because it was set in the imaginary ancient times for the first time in Korea. The "Arthdal Chronicles", which spent 54 billion won in production costs, failed to surpass 10% in viewership and lost face. Studio Dragon also saw its stock prices plummet.

Later, IU and Yeo Jin-goo's "Hotel Del Luna" brought back the channel's honor. The drama is about an elite hotelier who takes on the position of the manager of a hotel and experiences special things. "Hotel Del Luna" holds a record of 12.0% at its best.

"2019 Dramas, "SKY Castle" Opens and "When the Camellia Blooms" Closes"
by HanCinema is licensed under a Creative Commons Attribution-Share Alike 3.0 Unported License.
Based on a work from this source