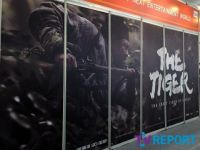 The Asian Film Market was held on the 3rd of October to the 6th at BEXCO in Busan. In the Contends Panda – NEW booth, a poster of the movie "The Tiger: An Old Hunter's Tale" was put up and drew the attention of buyers.

Choi Min-sik has conquered not only Korea but the whole world with his works like, "Old Boy", "Sympathy for Lady Vengeance", "I Saw the Devil", "The Admiral: Roaring Currents", "Lucy" and more.

He chose "The Tiger: An Old Hunter's Tale" after "The Admiral: Roaring Currents" and the movie is about Dae-ho, the last tiger of the Joseon times and Cheon Man-deok (Choi Min-sik) who is out to hunt it down.

The poster was released for the first time at the Asian Film Market. The domestic poster only has the hunter holding the gun on his lap in a snow-covered mountain background.

The poster that was released at the Market is of Choi Min-sik in grey drapes, running somewhere with his heavy gun in his hands. This alone intensifies the movie.

Meanwhile, "The Tiger: An Old Hunter's Tale" stars Jung Man-sik, Kim Sang-ho, Ren Osugi, Jung Suk-won, Ra Mi-ran and others. It's produced by Park Hoon-jung and will be released on the 17th of December.

"[20th BIFF] Choi Min-sik steals the show"
by HanCinema is licensed under a Creative Commons Attribution-Share Alike 3.0 Unported License.
Based on a work from this source